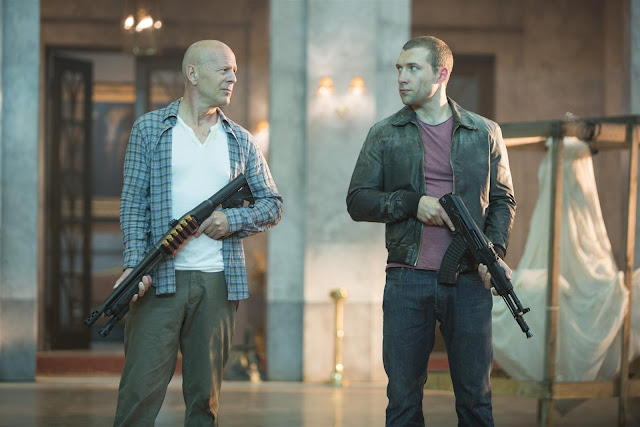 Bruce Willis has become a joke.  There I said it.  I just can't take him seriously when he shows up in a movie nowadays.  I laughed several times during Looper.  And he has pretty much ruined Joseph Gordon Levitt for me; he is now Bruce Willis Jr.  I wanted to give a warning that I would probably go between calling him by his character, JOHN MCCLANE(!), and his actual name.  It's hard not to when they're so hard to differentiate from.  So needless to say, I wasn't really expecting very much when going to see A Good Day To Die Hard.

I'll be the first to admit that I actually quite enjoyed the last entry Live Free Or Die Hard.  It was overly CGI, a little too slick for a Die Hard movie, and featured an indestructible Bruce Willis, but I still found it to be a good time.  And the same can be said for this film.  It's not a standout, and it won't be in my top 10 at the end of the year, but it was still a rather enjoyable time at the movies.  Willis is pretty terrible for the first half and makes John McClane seem stupid by trying to be funny.  It's like the writer just didn't understand the character and just watched youtube clips of McClane being snarky.  But, as I said, that's McClane in the FIRST half.  In the second half he's pretty much the ultimate badass.  The humor is more situation appropriate and much less forced.

And while I was disappointed when contender Aaron Paul wasn't cast in the role, relative newcomer Jai Courtney does a pretty damn good job.  I can absolutely see why he got cast and that's his charisma.  He needs to match Willis, someone who is known for his charisma, and he does so.  He makes the most of his screen-time and never becomes overbearing or annoying (looking at you Shia in Kingdom of the Crystal Skull).  Although there is one unintentionally funny moment that I will carry on into my daily life: "DAMN YOU, MCCLANE!"(trust me, his delivery is what sells it)

Let me tell you: the action in this movie is INSANE.  I'm talking at least $5 million in vehicular damage alone.  There is one point where Bruce Willis drives over a bunch of cars that are sitting in traffic, crushing them, in the process killing so many innocent people in the process.  Then a massive car that weighs literally tons upon tons gets flipped into the air rather than just landing on some cars, it crashes through some cement cylinder that was just sitting there on a semi, waiting to get crashed into.  That's right, a cement cylinder AKA it has two layers of cement the truck can crash into.

That pretty much sums up this movie.  Moment after movie of such ridiculous action it leaves you with an adrenaline rush.  But logic just doesn't seem to happen in this movie.  So here's where the MASSIVE SPOILERS start because there's just no way I can describe what entails without some insane spoilers.  So hopefully if I ramble enough you won't have accidentally read a spoiler through peripherals.  Whew.  I think that's enough space.

I'm 99% sure this film started out as an idea from Bruce Willis and I imagine this is how the conversation went.
Bruce Willis: "Okay, I want John McClane to go to Chernobyl."
Producer: "Great, but we can't do an entire film there though, Bruce.  It's really only a set piece."
Bruce Willis: "Okay then how bout we just do the last act there?  Really exploit the nuclear aspect of it."
Producer: "Perfect, I'll get some writer that has never seen a Die Hard movie but really likes Bourne Identity and Bond, and he'll just write the stuff that leads to that."
Bruce Willis: "A Die Hard movie in Russia? Hmm...makes sense!"

That is the gist of this film.  But let me tell you, this film is well worth it for that last act.  It is absolutely fantastic and really satisfies any action movie lovers thirst.

Back to the logic flaws, there is one point in this film where our main villains are at Chernobyl and this vault is super radioactive because it's been contained for so long (oh also THERE'S FUCKING URANIUM IN IT).  And this girls little iPad has some App that tell her the radiation levels.  So after they do some...spray...or...something?  Actually, I don't really know what happened there.  There's is apparently some device that makes things just not radioactive.  Why that hasn't been used on ALL OF CHERNOBYL, I have no idea.  Anyway, they spray this stuff and she checks her ipad, the levels start going down and before they're even down all the way she goes "Okay, we're good" and takes off her mask!  This is all in a span of 20 seconds!  WHAT!?!  Seriously, this is something that happens in a real movie.  One that's not on SyFy.

Logic flaws aside, the movie is pretty damn entertaining.  There is one shot (you'll know the one) that really stands out and will be talked about.  It's probably one of my favorite shots from a film in the past few years.  Yeah, it's that awesome.  It's hard to tell if the writer or Bruce Willis is to blame for some of the bad McClane moments but either way, I beg that they both watch the previous Die Hards before making number 6.  McClane is not an idiot, he's a smartass.  I can relate.
at March 09, 2013 No comments:
Email ThisBlogThis!Share to TwitterShare to FacebookShare to Pinterest
Newer Posts Older Posts Home
Subscribe to: Posts (Atom)