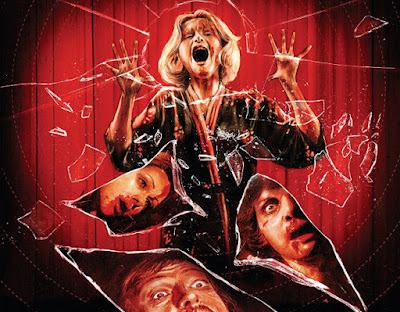 I am so unbelievably excited about "Halloween." Something about the latest batch of details has really ramped up my anticipation. I just can't believe we're finally getting a Halloween movie with Jamie Lee Curtis and a competent director. This hasn't happened since 1978 when the original was first released. That's 13 years before I was even born! It's hard not be pumped about such a thing. And that trailer... damn.

Relient K has taken over my life. I'm not even kidding. This seems like some kind of a weird joke but I swear I've gotten back into them. Yes, the Christian Alt band. No, I'm not Christian. Nor do I have any religious affiliations (though I quite like the Buddhist teachings) yet here I am listening to some band that randomly sings about God. I think it's a combination of things: 1) they were a favorite of mine in Middle School. 2) They aren't overtly Christian with their music and more talk about the struggles of being a youth. 3) I'm currently writing a book set in High School so it helps tap into my high school self. 4) I'm really weird.

I may be re-thinking Dario Argento. I had dismissed him years ago after a viewing of "Suspiria" left me less than impressed. But as the years have gone on, I've delved more into it. A recent obsession with "Dawn of the Dead" finally helped me make the leap and my god, Goblin is so good. I've always seen the praise and have enjoyed what I've heard of them but it wasn't until "Deep Red" that I was completely blown away. The score is one of the better I've ever heard and set me on an absolute trip. Sure, the repeat theme got a little old but dammit that theme was fantastic.

I'm finally developing some halfway decent reading habits. I try to read at least a chapter of some book a day. It's helped out a ton and I've been flying through a lot of stuff that's been on my bookshelf for a while. I love making progress with stuff like that while simultaneously expanding my own writing knowledge. Speaking of writing...

I wrote a screenplay in four days. As in I wrote a full screenplay, feature-length in 96 hours. I don't even have a name for it yet but holy shit I can't tell you how excited I am about it. I've been really inspired lately but kind of stuck in a rut with my book so I said screw it, I'm gonna just buckle down and write a script. So, with the aid of the background noise of NXT Takeover, I hammered out a screenplay. Is it good? I hope so. I'm going to give it some time to breathe but even it's a steaming pile of dogshit, I wrote a feature-length screenplay in just four days. I still can't believe it. That's an accomplishment I'll always look back on with fondness.
at June 22, 2018
Email ThisBlogThis!Share to TwitterShare to FacebookShare to Pinterest

EDIT: I swear every time I go back to this post, something gets deleted or moved around. If I didn't have such a history with blogger... 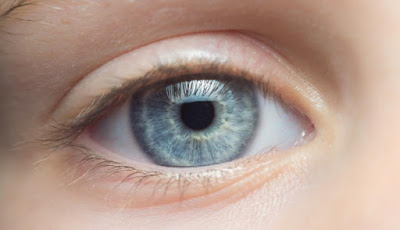 He wondered why she was even there. Sitting right there, at that exact time. Didn't she know? This had to be some kind of mistake.

He had never seen her there before. Sure, there were plenty of others just like her, why else would he be here, but not her. Not now. His bloodlust rose.

He tried to avoid the thoughts, those ones that they had told him to stop thinking. He didn't want to have another incident. Another corner to contain him.

The wind blew her hair up and it got in her eyes. Good. She deserved it. He had been thinking of this all afternoon. All week. All month. His entire life! Didn't she know!? This was his destiny.

He could practically see it now: walking over to her--she wouldn't expect a thing. It was perfect. He'd be on top of her in an instant. She would probably scream and cry but he didn't care. That may even be some of the fun.

Why was he being grabbed? No! This was his time to attack! He couldn't stop the tears from flowing and flowing out of his eyes. Didn't Mom know what this meant. He kicked and screamed, trying anything to break from her grasp. But she held on tight. And he saw his favorite sandbox in the distance, the little girl inside taking notice.

She watched him.
at June 15, 2018
Email ThisBlogThis!Share to TwitterShare to FacebookShare to Pinterest

This is an idea totally ripped off from the Duplass Brothers' book "Like Brothers" but I liked it so much that I took it. Wait... no, I co-opted it. Yeah, that sounds less devious. Either way, my whole plan was to write out all the movies I think could potentially be in my Top 10 Favorite Films of All Time. And I'd start eliminating until I was left with 10. Let's get started....

NOTE: Any excuse I can to use my huge whiteboard and it's happening. Sure, it probably would have been neater just doing it in regular list form via word but dammit, I wanted something different! 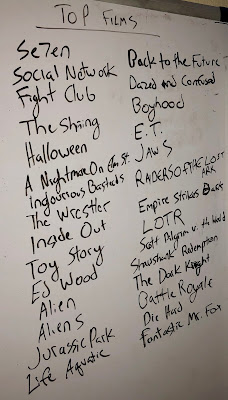 This is the main list. A combination of all the films I could think of that I absolutely adore and could see being on this list, as well as looking at my movie collection and thinking the same. I'm probably missing something but I spent quite a bit of time trying to get everything that deserved a place. 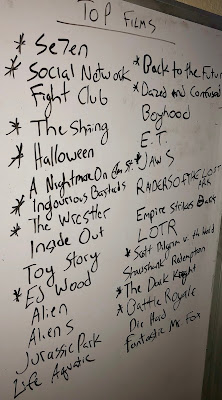 Here I went through and starred everything I KNEW needed to be on that list. So films that I watch all the time were immediately starred, as well as films that make me feel amazing when I watch them. 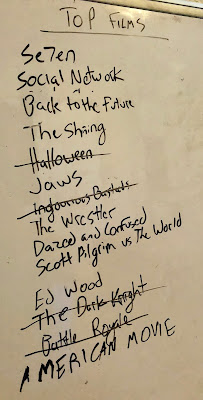 So here's 13 movies. 13 does not equal 10. So you can see where I had my problem.Wait. There's 14 here. Dammit, I added one because I can't believe I forgot it. "American Movie" belongs on damn near every list imaginable. It is so damn good and falls under the "Can Watch At Anytime No Matter How Good Or Shitty I'm Feeling" umbrella. Which is really where most of these came down to. I eliminated based on rewatchability and films I viewed as perfect. 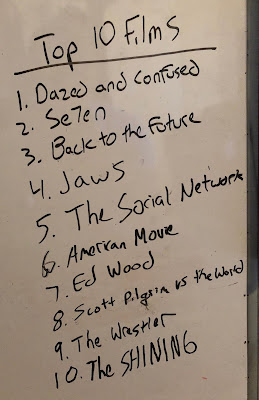 And here it is. No, it's not in an exact order but I threw them on in whatever order felt right. This is what I ended up with. Honestly, there are a few films that I'm surprised didn't make the cut but given there are only 10 spots, it shouldn't be. Still, I guess I surprise easily.
at June 01, 2018
Email ThisBlogThis!Share to TwitterShare to FacebookShare to Pinterest
Newer Posts Older Posts Home
Subscribe to: Posts (Atom)