When I was a kid I would get whatever cheap Spider-man comics I could from a local bookstore and read them over and over.  Then I discovered my father's great collection and read even more.  But somewhere along the way I lost track of comics.  I've read various Batman Graphics Novels throughout the years as well as Watchmen, but individual issues were so few and far between that I didn't really consider myself a comic reader.  So recently I've been on a mission to get in touch with my inner geek.  With that brings loads and loads of comic books.  There are some light spoilers ahead but nothing that will ruin any of these books for you. 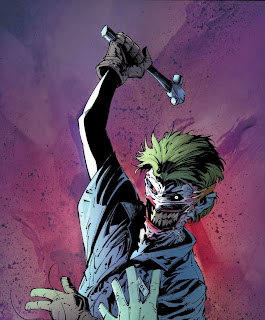 I had gotten into the New 52 Batman series fairly recently after it came out.  I kept up with it but staying with a monthly series gettings a little difficult after a while.  So after I break I came back, sped read them up to it's current run (#25) and I must say: bravo DC.  They really are able to reboot the series in a way that they both keep continuity and create their own.  Death of the Family is the best story arc I've read in a comic in ages.  And Court of Owls, which kicks off the reboot, is a fantastic way to introduce a great new character, while weaving it into the history of the world.  The best part of the series has been that I never know what will happen from issue to issue.  And since after Death of the Family, they've gone to Zero Year, it's great seeing how they introduce the classic Rogues Gallery.  They've reworked the Joker's origins in a way that both reimagines it and keeps it the same.  Damn good writing.


Unfortunately the annuals I've read aren't very good for the series.  The Joker, so well-written in the series, is given emotion and reason in his little one-off.  It's a big turnoff if you know...well ANYTHING about the character.  So just stick with the standard continuity and you should find yourself pretty blown away by the series.

I started rewatching my favorite episodes from Buffy The Vampire Slayer so that drew me to the season 8 comic, which I'm about halfway through.  It goes a little too far at times.  And sometimes it's just the writer being a sexually frustrated male (Really, did you have to add the Buffy goes Lesbian for a couple issues plotline?)  Otherwise the story is strong enough, just very comic booky.  I've heard that season 9 takes that away and goes back to the series roots, so I really look forward to it.  It's just hard, being a diehard fan of the show, to see them in castles in Scotland and flying around the globe.  It's just not Buffy.  But viewing it as solely a comic book universe, it's rather satisfying. 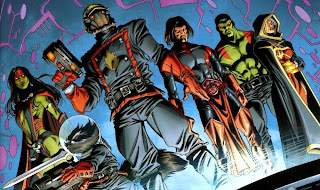 In anticipation for the Marvel movie that I'm looking most forward to, I decided to start Guardians of the Galaxy.  I thought it was going to be a great movie before reading the comics but now I KNOW it will be.  It's perfect part comedy and part space opera.  The humor is spot on and is genuinely funny.  I found myself laughing out loud fairly consistently which isn't common for me.  Rocket Raccoon in particular shines through a lot of the time.  When they are picking out the name, you'll laugh your ass off at his comments.

What really helps me is that I know which characters are being played by what actors so hearing their voice while reading really helps me to see how the movie will be and I can't say I'm disappointed with the casting decisions.  They all seem to be right on the money and, as has been confirmed with the past Marvel movies, casting is close to everything.  I'm only a few issues into the 2008 series and after that I'll move onto the reboot, both of which I've heard good things about.

Did you know that Doc Ock is Spider-man?  No, I'm serious, Doc Ock is fucking Spiderman in The Superior Spider-man.  I'll admit, my reaction was mostly likely similar to yours. "What the hell is going on?"  But actually, it really adds a much needed dynamic to the character of both Peter Parker and Spider-man.  Suddenly Spider-man is doing things he never would have before.  He's efficient and won't waste his time on petty crimes, characteristics not usually present in a superhero.  I particularly loved his interactions with Mary Jane.  I mean, just think, you're an old man suddenly in a young body with a hot red-head all over you.  To say it leads to some funny moments are an understatement.  You just have to see. 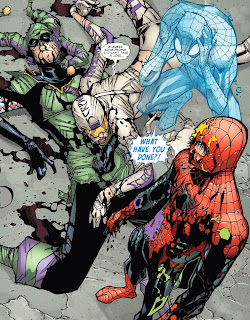 I'm only a couple issues into Superior so I have an entire years run to catch up on but hopefully the writing continues to be really good.  I look forward to Peter Parker's eventual reappearance.  The character should definitely be changing some values due to this so I think the series will be even stronger if/when they go back to Peter.

Before I end, what is the deal with most artwork nowadays?  Everything looks so much different from comics of the 90's and prior.  Advancements in technology has allowed for much more detail and shading techniques but unfortunately it makes all comics look the same.  New 52 Batman looks the same as Superior Spider-man because of this and it takes a little of the uniqueness out of it.  The more independent comics are still drawn old school but, unfortunately, it's only a matter of time before all current comics have this polished over look.  Damn.


Anyway, it's just been genuinely nice to get back into comics again.   I feel like I'm getting back in touch with a part I lost.  I look forward to continuing on with these various series.
at December 12, 2013 No comments:
Email ThisBlogThis!Share to TwitterShare to FacebookShare to Pinterest
Newer Posts Older Posts Home
Subscribe to: Posts (Atom)