Diving Back Into Nintendo (AKA I got a 3DS) 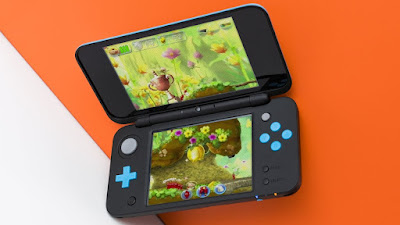 I've largely taken a back seat when it came to Nintendo for well over a decade. It just never really interested me. The Wii always came across as a kiddie/gimmick console, and I've always liked high performance/top of the line graphics, which isn't something Nintendo is known for. So I've been an XBOX guy since nearly 2002 and felt that I was in sore need of a change. Enter the 2DS XL.

For those not in the know, the 2DS is the same as the 3DS, just without the 3D gimmick and therefore cheaper. Seeing an affordable handheld that gave me access to a ton of games that were also on the hard to find SNES Classic and I was sold. But being the gamer I am, if I was going to dive into a new console, I was going to do it right. So I picked up some of the latest entries in all of the big Nintendo franchises and dove in head first.

When it comes to the console itself, I was really impressed with the size and feel. Despite being all plastic, it has a good weight to it and isn't so small that even people with big hands can play comfortably. I'll be honest though, I did kind of regret not getting a 3DS XL after I saw how solid the metal design is on those. I may have never used the 3D portion, but dammit if the sturdy design seemed good enough to warrant the cost.

I never realized that the screens are only 240p which, in the age of retina displays, feels kind of silly. To be fair, the 3DS' life cycle is essentially over. There's not going to be any major releases for any of the main franchises from here on out, with just random games coming out. Which is fine since the system came out in 2011 so it had a good run. And most people getting into a system are likely to just go for the Switch, but for those like me, who just wanted some cheap fun on the go, maybe this will help you finally make the decision.

So here are some of the games that I picked up, as well as what I thought about each of them. 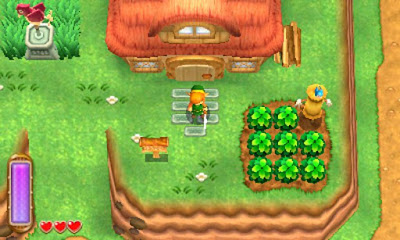 Zelda: A Link Between Worlds

Calling this a unique game is a bit of an understatement because I can't remember the last time I saw something so fresh while still looking so familiar. It works as a sort of sequel to A Link To The Past and even includes Hyrule so, as someone who hasn't played a Zelda game since then, it was a welcome treat for me. 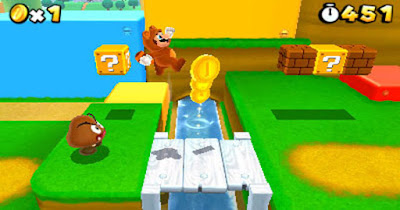 So much fun. I'll never tire of a good ole fashioned Mario Game. The only annoying aspect is that you NEED to collect the stars. I didn't realize until reaching a part of the game where I couldn't go further simply because I didn't have enough stars to enter the castle. But once I understood that mechanic, I sped through the game and is actually the only 3DS game I've actually completed. 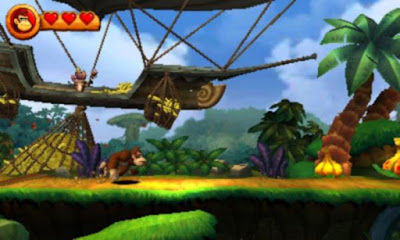 Similar to SM3L, this game is a platformer, although it goes more along the sidescrolling route like it's SNES predecessors. Donkey Kong Country has always been my favorite Nintendo series so I get a kick out of this game, despite the fact that I haven't beaten it and don't think I will be for the foreseeable future (damn Wave level). 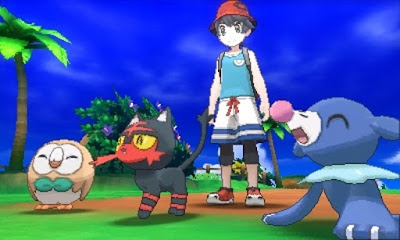 Holy shit, there is just so much text to get through. The game never really stops feeling like a tutorial. You're just kind of constantly going from point A to point B, with little sense of exploration. And the number of times I had to spend a full two minutes skipping through text/cut scenes got very old fast. Don't get me wrong, it's a fun game, but it'd be a lot more fun if it didn't hold your hand as much. And that's coming from someone that hasn't played a Pokemon game since the original 152 (Mewtwo is the last of those right? Or is it 151 with just Mew? Fuck, I can't remember). I just want to be able to roam around and collect pokemon but dammit if there isn't always some kind of objective blasting in my face.

I'm excited about the system and all of the catching up I can do with old franchises. The main thing will be being able to go back and play NES, SNES and even Gameboy via Virtual Console. That's not to mention the backwards compatibility with DS games, which had some N64 remakes on it, which furthers my goal. I'd recommend it, especially if you can hack it.
at April 27, 2018 1 comment:
Email ThisBlogThis!Share to TwitterShare to FacebookShare to Pinterest

Go see "A Quiet Place" immediately. It's so good that I'm not even sure how it's gotten so mainstream. Usually films like this are only appreciated by a certain audience but damn near everyone is loving this movie. When I saw it, I waited for my date to arrive and saw loads of pre-teens and teens entering the theater much to my dismay. But all of that worry was for naught because the moment the film started, the entire room was enthralled and kept their traps shut. Thank god. And it goes to show just how good this movie is, because that's no easy task (especially considering the film only has like 25 lines of dialogue).

I really love me some Resident Evil 5. I had only played it a few times back when it came out and have been having a blast this time around. I love the mechanics and just how much of an action game it is. 4 always made me too tense so, I think after playing so much of 5, I may finally be able to complete 4, a game considered to be the best in the franchise by many.

This is a place for random thoughts, right? I don't know why I've been thinking about this but Man of Steel may have been the worst technical experience I've ever had in a movie theater. And I mean that literally. I saw that film in IMAX in New Orleans, where they boasted the best experience around. Instead I could literally hear the feedback every time someone spoke. I could hear the fades the audio engineer made on every line of dialogue. When someone wasn't speaking, it faded out. I could practically see the project opened up in Pro Tools. I don't know how such a sloppy mixing job made it through the system or if someone at that particular theater just happened to fuck up but, to this day, it's an experience that hasn't been repeated.

I'm going to make this blog a little more active (for a few months at least). Not exactly a difficult task when the only thing I've done on here was a post on January 1st, and the place has been barren ever since. My plan is to do a new article every Friday. I really want to do it more just to express myself a little more as I've gotten into a little bit of a creative rut and having deadlines can sometimes help me. So what does that mean for you? Keep an eye out on this space and you'll be in for at least a few mildly entertaining stories/pieces/blurbs. I have quite the backlog, so the next few months of Friday's should be covered, we'll see how motivated I am after that.

I'm crazy far behind on my "New Movie Quota" for this year. My goal has been to hit 150 films I'd never seen before and I'm currently at a whopping 12 films. It's nearly a third of the way through the year and I'm nearly 40 films behind. Yeesh. So in an effort to make a dent in that number, I decided to give myself the goal of watching a new film everyday until Marc's Wedding festivities. Will it happen? I'm hoping so because dear god have I been terrible at keeping up. I'm also behind in my total book count for the year. Dammit. Speaking of new movies...

Ready Player One was pretty great. I wouldn't say it blew me away like the book did but I was certainly entertained. It wasn't as dark as the book but I really loved the back and forth between Artemis and Parzival. She seems much more playful in the film than she is in the books, but I like the change. Aech's voice annoyed me to no end and that was inexcusable. I already knew the twist but I can't imagine they managed to fool anyone with that poor sound work. Whoever worked on that should feel bad about putting such cheap work in such a big budget film. It really took me out of the moment whenever she spoke.
at April 20, 2018 No comments:
Email ThisBlogThis!Share to TwitterShare to FacebookShare to Pinterest
Newer Posts Older Posts Home
Subscribe to: Posts (Atom)