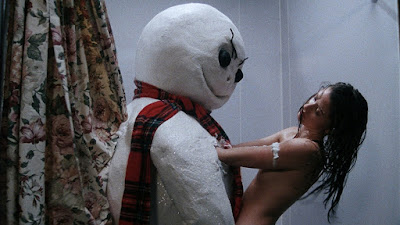 How was this movie made in 1997? Hell, how on earth did this movie beat the Michael Keaton starring family movie to release date? This type of thing happens a lot whenever a big studio makes a film with an easily rippable concept and some sleazebags come along to make a quick buck. I'm pretty much describing Asylum films these days. Regardless...

This movie is unbelievably stupid and I can't believe it's taken me this long to see it. Why? Because it's amazing. It's definitely more horror oriented than anything but the film goes full blown comedy throughout, especially with the villain. Hell, he spouts our more one-liners and silly jokes than I thought was even possible (and I've seen the Keaton-starring Frost).

I also had no idea that the shower scene with Shannon Elizabeth was just a rape scene. It had always been presented as "girl has sex with snowman in shower" not "girl gets raped by snowman in the shower." And did I miss out on the nudity? I thought that was the whole deal with that scene? Maybe my mind was still being blown away so I didn't process it properly. Either way, the 13-year-old in me was disapointed.

I think my biggest question is: Why the hell is the snowman from the cover not featured in the film at all! Seriously, he's just a simple, run of the mill snowman, not this crazy hook, nosed demon they show off on the cover!

I can't say enough how much I enjoyed the stupidity of this film. This is exactly the kind of craziness that I want in my "so bad it's good" movies. Despite the joke that it's become, I'm sure I'll be throwing this into my annual Christmas lineup along with Silent Night, Deadly Night and Krampus.


Next Up: The Witch
at October 10, 2017
Email ThisBlogThis!Share to TwitterShare to FacebookShare to Pinterest