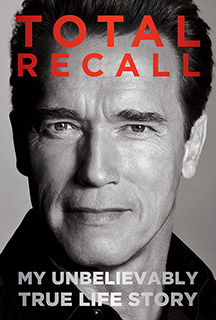 I was originally just going to review the entire book at the end of the month but I feel this is a much better idea for the sole fact that I can focus on one area at a time.  Since the book is very segmented in how it's presented, with certain topics being the main focus while others are merely mentioned, I figured why not?  With that in mind, this first part will concern his early life and bodybuilding days.

Man is this guy inspirational.  Barely had anything growing up and through hard work and discipline he was able to become world renowned in bodybuilding.  His pursuit towards the major titles in the sport came as no surprise after he mechanically goes through his routine and how he improved himself. It was fool proof so of course he was going to win everything.  And he did.  His impressive win streak is one you'd expect from a movie, not someone's actual life.  But that's just Arnold and it's almost expected; it certainly is from him.

And boy does this guy love America.  I mean, just look at this picture: 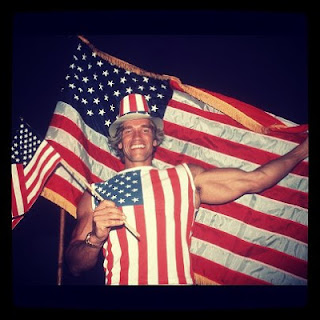 His desire to become a US citizen while also retaining his Austrian citizenship, a feat few are granted by the government, is impressive.  The main wants to pay respect to his family and his roots but also become part of the country he's always felt he's belonged in.  Not exactly a story I was expecting to be told in the book of an action star but one appreciated nonetheless.

The most impressive part of this section of the book, and trait that carries on throughout, is his dedication to becoming the best bodybuilder in the world.  He didn't make any excuses and did everything he needed to in order to be the best.  He was confident in his abilities and, much to my own surprise, very intelligent.  The man who I once always just saw as "The Terminator" has lived one of the more fascinating lives I've ever read about and that's all before his movie career.
at November 13, 2012 No comments:
Email ThisBlogThis!Share to TwitterShare to FacebookShare to Pinterest 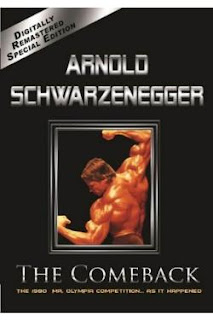 This is more of a special feature than an actual full-length film but it doesn't make it any less enjoyable. Looking at the Mr. Olympia competition, 5 years after Arnold had retired at the conclusion of the film Pumping Iron, he makes a surprise entrance into the contest.

This is a different Arnold than the one seen in Pumping Iron.  Who was once a young, cocky man who showed no fear, has turned into a matured, antsy man, who no longer carries the confidence he once held.  If anything though, it just makes Arnold more dimensional.  Unfortunately I already knew how it ended so the moments of "tension" were anything but.  However, I did enjoy seeing the world again because it's certainly one I've never seen before.
at November 13, 2012 No comments:
Email ThisBlogThis!Share to TwitterShare to FacebookShare to Pinterest 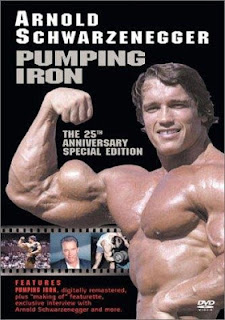 Okay, that was far more interesting than it ever should have been.  I added Arnold's bodybuilding work as some way to pad the numbers for this series since his standard filmography wouldn't expand the month of November.  So I figured, why not start with the biggest of them all, the documentary that really put Arnold on the map: Pumping Iron.  Having read this part in his autobiography already, none of the events really shocked me but it was fun to see them actually played out rather than just reading about it.

Here Arnold comes across as an overconfident prick but it's hard to view him that way.  His actions are questionable but from a competitive standpoint, he's just trying to get any advantage his can, and because of his smarts, his big advantage is a mental one.  His interactions with Ferrigno are classic.  You can just see him trying to psych him out and doing so in the biggest of ways.  Makes me more impressed with Arnold on a mental level.

The entire movie is filled with impressive individuals though.  Anyone who can train that much, every day for years and years gets my respect.  I know I could never do that.  But yeah, I can't say the film is for everyone.  I found it more interesting due to it's look at the human condition but the subject matter itself may turn some people off.  I'd highly recommend it though because it certainly gives the sport of bodybuilding more dimension than it lets on, on the surface.
at November 09, 2012 No comments:
Email ThisBlogThis!Share to TwitterShare to FacebookShare to Pinterest

That's right.  Goodbye Horror movies, hello Awwnold films.  I'll be looking at all sorts of movies throughout his career, a book or two, a television appearance, whatever else I can come up with.  The whole point is that it'll be Schwarzenneger related. 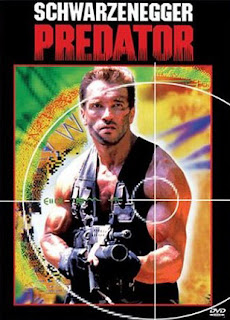 What better a way to start off my Arnold series than by transitioning from Horror movies to the mother of all killer monsters.  I love this movie far more than I should.  I didn't grow up with it, and had even seen the second one more times (it was played on TV more often, shut up), yet as soon as I finally gave this the time, I loved it.  The larger than life characters that show off their badassery in the opening scene but then get picked off by the Predator one-by-one.  Arnold being at his absolute most Arnoldiness (yes, that's a word).

One thing I never realized is how much happens offscreen.  Several characters are given most of, if not the entirety of their death not on camera.  I don't have a problem with it as it's done for story purposes and not editing purposes (or at least doesn't appear that way).  It's still an interesting thing to think of though when it comes to this movie since it's often viewed as uberviolent.  Don't get me wrong though, this film is extremely violent.  The skinned bodies still go down as one of the coolest things I've seen in a movie (this was pre-Hellraiser lacking of skin).

And seeing as how this is SchwarzeNovember, I have to talk about Arnold.  That man's biceps are bigger than my head.  Combine his Greek-like body with the fantastic one-liners, you have the greatest action star of the 80's and this movie showcases everything that makes him a legend.  His final showdown with the predator is classic.  And really, without Arnold, this movie just wouldn't be the same.
at November 01, 2012 No comments:
Email ThisBlogThis!Share to TwitterShare to FacebookShare to Pinterest
Newer Posts Older Posts Home
Subscribe to: Posts (Atom)