What Went Through My Head Watching... "Fantastic Four"

Sometimes I like to take notes during a movie, just to make sure that I don't forget about it when I write a review/article for it later. It started way back when I wrote my thoughts -- sequential as I watch -- on "Transformers" and posted it on Myspace. Having done it several times since, I thought it'd be fun to bring that back as a column I can bring around from time to time and talk about a movie, without it just being a review.

So what better film to start it off than one that has been flabbergasting viewers and reviewers everywhere. Let's see what went through my head while watching Josh Trank's Fantastic Four. 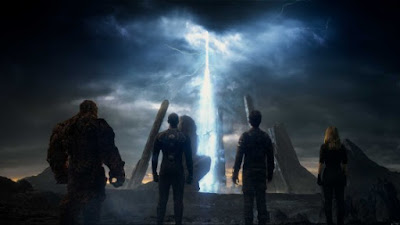 The film starts with a reference to Eli Manning. No, I'm not kidding. This is not off to a good start.

The actor playing Young Reed is lifeless and stale, with little to no human element to his acting.

The entire film is just so damn cliché and lazy that it's flabbergasting the level of incompetence.

Ben Grimm's abusive brother used to say "It's Clobberin Time" before the game.

So Ben and Reed meet in a junk yard and become BFFs?

Wait, so Reed Richards gets discovered… at a high school science fair?

The plot itself is terrible and whoever cobbled together this screenplay should be ashamed but the actors aren't at fault here. They're all trying.

"Doctor Doom over here" heh heh heh. Seriously, that was the worst line.

Of course Johnny Storm is introduced via Street Race. Of course he is. Because HOW ELSE WOULD WE KNOW HE'S AN ADRENALINE JUNKIE!

Never mind, I take back what I said about the actors. Michael B Jordan and his father are pretty terrible.

So much exposition is done through dialogue.

Johnny and Reed have bonded over their dislike of Victor?

Also, how is everyone not super aware of the fact that Victor is a bad guy from the get go.

I like that Victor's jealousy comes from not being as good as Reed but without Reed flaunting it in front of him. He's just good.

Oh so now they're all bonding while they get drunk.

Whoever made the decision with those suits didn't realize how hard it would be to tell the difference between characters.

It's hard not to laugh at how the characters get their powers. I guess they did a better job of explaining it than the Tim Story movies but I'm not sure that's a high bar.

Annnnnnd now Reed is climbing through a ceiling grate. It's a good thing those ventilation systems are so big and that he just so happened to be connected to Ben's cell.

The time jump is just terrible. So Ben Grimm is a government weapon now?

So all of the fun part of an origin story is summed up on video after said time jump? Why?

I was kind of enjoying it and then the second half happened.

Want to know how not to do a superhero origin story? Watch the second half of this movie. Everything is so rushed that half of it doesn't even make sense.

Doom looks okay one minute and like total shit the next.

This follows the most generic action beats imaginable. Oh so the father got killed right in front of them by the villain right before they head off for the big finale.

There's not much good reasoning behind why Victor would suddenly be a supervillain. Good decision to stay away from the blogger idea they had originally.

And since when did Reed learn how to fight? He was just a big nerd and never got training like the others that spent a year in the government training facility.

That was probably the worst "end battle" to a superhero film I've ever seen. I don't think the film overall was that terrible, but that end was just stupid.
The "hero shot" towards the end sums up everything wrong with the movie: a big crater with a washed out palette. You know, that's what I want from my brightly lit comics.

I look forward to when they do this on How Did This Get Made.
at September 14, 2015
Email ThisBlogThis!Share to TwitterShare to FacebookShare to Pinterest