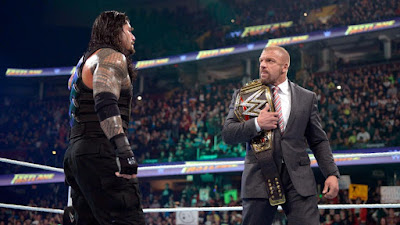 When it comes to professional wrestling, there is absolutely nothing bigger than Wrestlemania. It is the biggest event in all of sports entertainment, and provides for some of the biggest moments of the year. No matter how poor the card looks, it almost always delivers. The last two years we've been treated to absolutely fantastic events, front start to finish. Yes-lemania at 30 may have been the greatest story that's ever unfolded on the grandest stage of them all and last year provided for more stellar moments than I care to count (Rollins cashing in being the big standout). When it came to quality matches, you always knew that Wrestlemania would have some of the best around. It was expected. Everything was compared to Mania.

But now that has changed. NXT has come along and completely changed the game. Last year in San Jose, going into their big Friday night show, there was a question of "Will it be as good as Mania?" That has very quickly changed. No, now we're asking "Will it be as good as Takeover?" And the answer to that, after the end of a very tumultuous Wrestlemania 32 weekend, was decidedly no.

NXT Takover: Dallas is one of the better wrestling events in recent memory.

Nakamura v. Zayn was absolutely life changing. This is now my go-to match to show people that aren't into professional wrestling. It is so good that it can intrigue even the most skeptical of people because none of it feels choreographed. It all feels natural and called in the ring, which is precisely what Nakamura brings to the table. He brings something fresh, something that we've never seen before, and does it with more charisma than anyone that WWE has ever seen, past or present.

I can honestly say that this is the most disappointed I've ever been in a Wrestlemania. Usually I'm at least having fun with the show but with this one, the one prevailing thought was "Why are they doing this?" Why is New Day, the most over Tag Team (and champions) in the WWE, losing to a put-together, won't be here in two months, group of Superstars? Why is Zack Ryder, someone who wasn't even supposed to be in the match and hasn't had any build, winning the IC title that has been carefully built for six months? And most importantly, why is WWE ignoring the fans and having Roman Reigns win the title, muting the entire audience as Mania goes off the air as the stadium boos?

Because Vince McMahon is stubborn.

And that's why WWE will never fully succeed while he's around. He thinks he knows better than all the fans watching product, and thinks he knows who needs pushed, audience be damned. Many people stated prior to Mania (including Jim Ross) that if Roman goes over clean at Mania, with no turn, then Vince is out of touch. Well that is precisely what happened, to a chorus of boos, NXT chants, and general disdain. Hell, Vince repeatedly flexed his muscle, putting Jericho over Styles (in one of the most baffling booking decisions on an already confusing card) in his usual "WWE is better than any other wrestling company and you better remember that" bullshit. Then he did the unthinkable.

See, the Raw after Wrestlemania is often known as the best Raw of the year. It's always exciting and the crowd is often the most fun part of it all. Well, this year they decided to state throughout this year's broadcast, that this crowd was a weird one. That they cheer the people they usually boo and book the people they usually cheer AKA they're trying to explain why the crowd is booing Roman Reigns and they're making an excuse for it. They're marginalizing all of the fans that make their voices heard just because it doesn't go with the status quo.

These are all part of the reason why I can't stomach the product anymore and, for the first time in 6 years, will be cutting it out. Now, I'm still a giant wrestling fan so I'll still be catching NXT, Lucha Underground, and NJPW as much as possible but when it comes to WWE Main Roster, I'm taking a break. The product as a whole doesn't satisfy me and I'm sick of backing something that I don't even like. I hope that the quality will improve and that things will get better enough for me to come back but for now...

Thanks for the memories.
at April 08, 2016
Email ThisBlogThis!Share to TwitterShare to FacebookShare to Pinterest