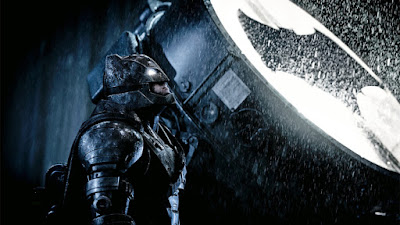 To be fully transparent, I must say that I had no intention of seeing BvS in theaters from the moment the first trailer was released. Having been a person that really disliked Man of Steel I knew that it would have similar sensibilities and all the footage that was released, made the film look terrible. Cut to the film's release, and it gets completely panned by critics, furthering my belief that there's no real reason to see the film in theaters, since my suspicions were confirmed true.

I was then given the option to see it in theaters for free due to a movie ticket included in my Blurays of Arrow and The Flash. Even with the free ticket, the film didn't draw me to the theater and they eventually expired. That's how little my interest was in this film despite it being a team-up of two of the biggest characters in all of comic-book-dom.

I also need to get this out of the way because I'm worried that any positive comments I make towards the film may be misconstrued: This is not a good movie. While it's not the colossal failure that many, myself included, expected it to be, it's still a mess of a film. When your third act, featuring the biggest fight of the movie, is the slowest and most boring part, then you know the film has problems on top of problems but it also shows that there was some good in the beginning.

Most of the good comes from Ben Affleck's Batman. While the competition is stiff, Affleck may be the best Batman we've ever been treated to on film. Sure, Kevin Conroy's Dark Knight from both the animated series and the Arkham series is probably the greatest overall, the fact that Affleck can come in and give all previous actors a run for their money is saying a lot. He was easily the best part of this film and is something that I really look forward to when it comes to the new film.

Not everything involving Batman is great though. His interactions with Superman are boring and uninspired, with most of his best scenes coming from interactions with criminals or Alfred. And that opening scene, going over the Wayne family death that we all know by heart, is one of the more melodramatic pieces I've ever seen. At times it felt like a music video for some kind of emo band. Add to that the Jeep Wrangler commercial that occurs a few minutes later, and you get a beginning that is one of the harder ones to get through in all of Superhero-dom.

The Justice League stuff feels so thrown together that it feels like an insult to fans. Which is too bad, because they could have easily made the transition with the same Bruce Wayne arc only without the random footage of JL members in different environments. All that did was remind me that Warner Bros. didn't jump on the JL bandwagon when they should have and are now having to fast track everything to try and catch up with Marvel.

I honestly thought that Jessie Eisenberg was going to knock the role of Lex Luthor out of the park. I figured that Snyder cast him for his "Mark Zuckerberg" performance but that isn't the case at all. No, instead Eisenberg gives what is easily the worst performance of the movie and possibly his career. I still don't understand why they decided to make him so zany and not just a disconnected genius a la The Social Network. He chews up the scenery in every single scene he's in and never once tries to reign it in. One of the final shots rests on Luthor in his cell and it's one of the most unintentionally comedic moments I've ever witnessed.

So yes, it's as bad as you could have ever thought it was but it also had some really cool stuff. Sure, the plot is nonsense and Snyder is just throwing way too much at the screen (we get World's Finest, Death of Superman, and Superman Lives all in one story) but we also get Ben Affleck as Batman which may honestly be worth all the other trouble with this movie. While the Superman side of things is still a mess, Batman's future is certainly looking bright.

Let's just hope they don't V each other again anytime soon.
at May 20, 2016
Email ThisBlogThis!Share to TwitterShare to FacebookShare to Pinterest