NOTE: Apologies for the lack of content lately. Something happened with Blogger and I haven't had access to my account for almost two weeks. I was working on something important and wasn't able to get it sorted out with Customer Support until today. To make up for it, I'll be releasing a new article every single day this week! Again, apologies for the delay. 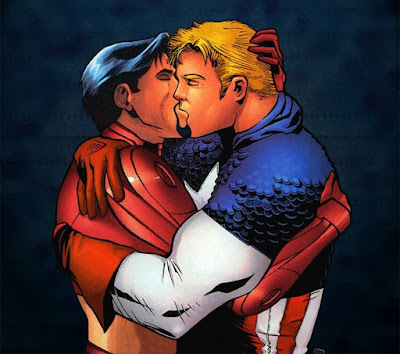 Every day it seems as though I'm waking up to a new headline where someone is being offended about something entirely ridiculous. Recently, a lot of it involved Captain America and I couldn't help but shake my head at the nonsense being spewed out. For those not aware, Captain America was recently revealed to be secretly working for Hydra all along. Then, after an online campaign on #GetElsaAGirlfriend, those same do-gooders decided that Captain America NEEDED a boyfriend.

I'm not sure when our society decided we needed to alter our past in order to better represent our present but I guess I shouldn't be surprised. People are constantly trying to make huge alterations to characters that have largely been established for 50+ years, all to try and suit some status quo that most people fight against. The vocal minority in our society has taken up the podium in a way that we've never seen before. We even have one of those types of people running for President right now! (hint: that's not a good thing.)

So let me ask you, if there is a very famous gay character and suddenly people started say "They NEED to be straight" is the reaction anything other than fuck off? Yet when the roles are reversed, suddenly the LGBT community gets up in arms about this (and rightfully so). This kind of hypocricy is all too present in our society these days. People are so often up in arms about something that, when the roles are reversed, they couldn't be further against.

What we need isn't characters that have been established for so long, suddenly being changed at their core to meet some kind of societal pressure. No, what we need is brand new characters being created that represent today's values. Captain America was made in a time of homebred America values and represents those WW2 vets that gave up everything to save us from tyranny. Why can't we have a character created these days that fits more in line with the present?

Seems to me like more laziness on part of the people that are wanting to facilitate these changes. Sure, they want LGBT to represented in comics but they don't want to go through the hard work of making a character popular and growing them. No, they just want to take characters that have already been built and had years of hardwork put into them, changed to fit their own desirable traits. If you want LGBT characters to be represented in ANY medium then there's a very important first step:

at June 06, 2016
Email ThisBlogThis!Share to TwitterShare to FacebookShare to Pinterest