Worried about violence? No problem. Had to retake the "holding the book" pic for promotional purposes.

If there's one statement that has been prevalent when readers have been finishing up The Crimson Summer it's that "it's nothing like expected." So far, it's only been said in a positive light but it still made me wonder if I had done my job in promoting the book. Maybe I was making this seem like too "run of a mill slasher."

Let's get into the whole reason I wrote the book in the first place...

When I was a teenager I was absolutely obsessed with horror movies. It didn't matter what sub-genre it happened to fall into, I was watching everything and anything. My favorite sub-genre has always remained the same: slasher. A Nightmare On Elm Street, Halloween, Scream and, of course, Friday the 13th were all staples of my teenage years. I would watch these films on loop, adding in whatever other similar movies I could find (Pieces, Happy Birthday To Me, Aprils Fools Day, etc.). I dissected these movies and knew the formula better than I did the one's in my math homework (my Math grade often reflected that). These were still the days of "First Time On DVD!" releases and I would pick up whatever horror movie it happened to be, regardless of whether I had seen it or not. But that obsession just wouldn't stop. So I took to Amazon to find something else that could fill my time: books.

Little did I know that the book I was looking for never quite existed. Slasher books were not and still aren't much of a thing. The ones that are out there are usually based on film franchises and even those still fell to the same logistical issues of the movies from which they were based. That's when the idea came to me: why not just write my own book? It percolated for a period of time while I went and pursued screenwriting and film-making. Then, with a choice in front of me, I decided to finally pursue what I had been thinking about for over a decade.

So I started the process of making my slasher book come to life. I quickly decided that I wanted to do a more logical approach to Friday the 13th. My plan was to create many different characters, really have you get to know them, and them kill them off in horrific ways. I wanted to abide by the moral code set forth by so many slashers before it while also deterring from that to throw some red herrings into the mix. 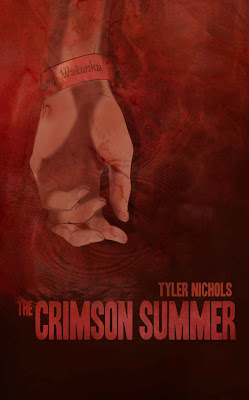 I'm not going to pretend that the book came easy. There were a lot of long, sleepless nights where I labored over making sense of it all. This book brought me to tears as I would read long passages and just hate everything about it. I had more ups and downs with this book than I thought could be possible with a Word Document, but I made it out the other side with a book I'm extremely proud of. It's MY version of Friday the 13th, which is to say it's nothing like Friday the 13th at all. The only thing that The Crimson Summer has in common with F13 is that there's a killer at a summer camp. That's where it ends.

So if you're hesitant about the book because you're worried it's going to be tasteless sex and glorifying violence, please know that's not the case at all. While many horror facets take that approach, it's never been an appealing route and all important works of fiction, for me, have been reliant on the characters. So that has always been my primary focus, no matter what story I'm trying to tell. So if you're wanting a character piece, do yourself a favor and pick up a copy here. I promise you won't regret it.
at July 02, 2016
Email ThisBlogThis!Share to TwitterShare to FacebookShare to Pinterest