A Word On The Crimson Summer

This article features VERY LIGHT spoilers for The Crimson Summer. It doesn't give away any plot points but there are vague scenes mentioned so if you want to go in 100% fresh, stop reading after the trailer. 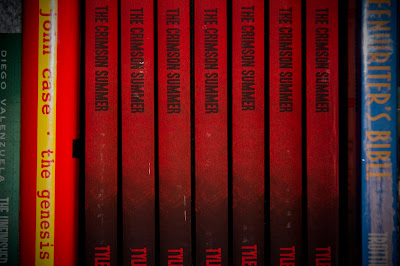 The first week of release for my debut novel, The Crimson Summer, is drawing to a close. It's been awesome to see the support from people I never expected it from and exciting to engage with those that are reading/have already read it (Yes, there are people that have already finished the book and that is absolutely mind-blowing to me).

There were a lot of people that bought Day One that I wasn't expecting to pick the book up so fast due to their lack of interest in horror. But they picked it up. Despite their lack of interest towards the genre they supported me and that means the absolute world. Speaking of support in places I wasn't expecting, I had many of my past teachers pick up copies of the book. This has both excited and terrified me given that the first chapter deals with awkward masturbation and an odd obsession with frog guts. Here's hoping they'll be able to look at me the same.

If you're reading this and you haven't picked up a copy yet, please don't feel bad. I understand how life goes and picking it up right away isn't in the cards for everybody. I had to wait to purchase a good friend of mine's book because things were rough financially at the time of release. It happens. I don't hold it against you at all. Nor do I hold it against you if you bought it and are not able to read it immediately. Again, life happens and I understand that.

With all the comments from people who are reading/finishing the book, there are some things that I'd like to address, whether it's something I had planned on talking about or something that has been brought to my attention recently, I figured now was as good of a time as any.

First of all, no character in the book is based upon myself. I know that it's hard for people to differentiate the story from me, given that my narrative is a very conversational tone, and the narrator has my voice. This has lead to several people coming up to me as saying "XXXX character is totally you." I take it as a compliment as, given that there's no one I know better than myself, I purposely used small qualities of my own for some of the leads. But please, just because you see one aspect and go "Oh that's so Tyler", that doesn't mean the other aspects of the character are representative of me. No character is myself in the same way that none of the other characters in the story are based on anyone else in my life. Traits are traits and names are names.

There's a particular debate in the film on Superheroes that people keep thinking is me venting. It's not. I used that debate simply because it was one of the most prevalent ones in the world of pop culture because of the popularity of comic book movies right now. I wanted to represent that by having two characters talk about it in a way that I've seen over and over. There are some people that don't see that particular film as bad, but those aren't my characters. This was just another way for me to really get you to know these characters without taking up too much time.

I've also been getting questions about autographs. While I would absolutely love to have an option for autographs right now, that is just not in the cards. This is only my first book and I think it's a little pompous to have an "autographed" option. If you want to get my Herbie Hancock, then you will just have to do so in person. (note: for all of you Michigan folks, I should be back to visit in August, so if you want a signed copy, I can do it then.)

I have plans to do a Q&A in a month, so that should answer anything that I haven't answered here. I didn't want to go into too many details because I know the majority of people have not reached the end yet. The Q&A will be spoiler laden and answer some of the lingering questions you may have upon reaching the final page. Not all questions will be answered as there are some things in the book that are intentionally vague but I'll do my best to expand upon the ones I can answer.

I know that this is getting old and tired but I really have to thank each and every one of you that has purchased the book. Having so much support has been amazing and really makes all the hard work worth it. I can only hope that it just keeps spreading and opens up to more and more people because as great as royalties are, the real joy is getting to talk to fans of the book. Creating a world is hard work but having people invested in it?

Worth it.
at June 17, 2016
Email ThisBlogThis!Share to TwitterShare to FacebookShare to Pinterest