A Series Of Unfortunate Events 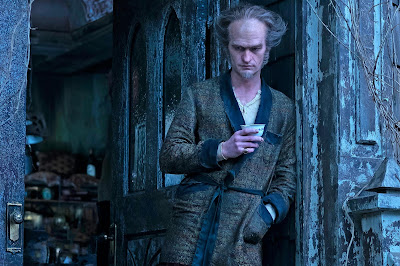 First off, it's a kids show. There are going to be a lot of Series of Unfortunate Events fans that won't like that because as much as the books were "kids" books, they are extremely depressing with very dark humor. It's one of the things that drew me to the series but is also something that I understand wouldn't work in a Netflix series. They want it to be marketable and, given how much money would take to make the world come to life, having it be too dark would alienate a lot of the audience (as evidenced by the 2005 film). I'm okay with that and have moved on.

I love the tone the show takes on; it almost feels like a cartoon. This allows for several deaths/misfortunes, but due to the whimsical tone, they don't have a true to life impact--which is a good thing. I remember being quite afraid of Count Olaf and his cohorts in the book and I don't think that would work here. It's not a horror movie.

NPH's Olaf is both menacing and jokey while still remaining an actual character (unlike Carrey's version which was essentially just Carrey). The look is absolutely stellar and I get great joy whenever he's in the usual Olaf garb and, given the various disguises he dons throughout the series, those moments are a treat. 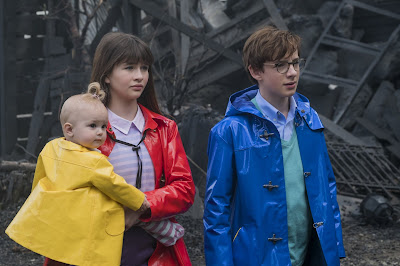 I love the emphasis they put on Violet when she's putting her hair up to think. In the books, these moments are always made into a big deal and you feel like things will be better (a rarity in the very dreary series). They're always moments that stand out and I really like that the camera holds on her during these times.

The real treat was finally seeing The Miserable Mill come to life. Having seen the movie, I've already been able to see the first three books translated to the screen, but that's all we were ever given. Seeing the fourth book adapted brought back many memories from the book and even reminded me of proceeding books that I had long since forgotten.

The show made me want to re-read the series, as I hadn't read them since I was a youth and hadn't finished them. I remembered them being very dark and clever but I wasn't sure if I was looking at them through nostalgia goggles. That's not the case though as these books are much more mature than their length would have you believe and really pack a punch. I read the first book in a little over an hour but that doesn't mean there isn't quality within those pages. I look forward to continuing the series and then seeing how Netflix manages to recreate it with what I assume will be more seasons to come.
at January 15, 2017
Email ThisBlogThis!Share to TwitterShare to FacebookShare to Pinterest