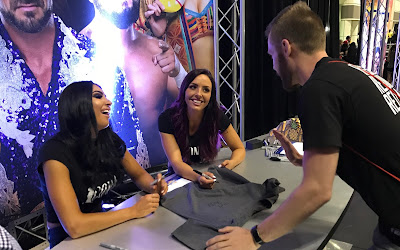 Wrestlemania wasn't without its ups and downs. I would say that overall the entire weekend was a positive but anything that ends on a downer note can leave a poor taste in your mouth and that's exactly what Mania in Orlando did. I wish that things were different and that they hadn't made some of the booking decisions they did but that's just Vince at Mania. Doesn't like to give wins to first time Mania singles competitors and likes to randomly throw wrenches into well laid plans because he wants a certain "surprise" element. It wasn't nearly as bad as 32 where 80% of the booking made no sense, but it was still thoroughly confusing. Still, I really enjoyed the majority of the show and am glad I was able to attend.

Battle Royale is so fucking good. I wish that more people would seek this film out as I know so few that have actually gone out of their way to. As someone that had to download a specific program, navigate an all-Japanese website and then watch said file on an old HP laptop with terrible resolution, I can't believe that this movie is on Netflix and readily available to so many yet still it goes unwatched. It's a shame.

I haven't been to the theaters since October. It's not like there haven't been great films being released over the past few months, I just really hate going to the theaters. Really, really hate it. Which is too bad because I always had such amazing experiences growing up and going to the local NCG in Coldwater. I guess I never fully appreciated those days because I can't seem to go to a movie in a Greeley without being thoroughly annoyed by texting/talking/general lack of social awareness. It sucks but my alternative has been buying the movies I know I'll like right when they're released, since I saved money on not seeing them in theaters. I did this with Rogue One and will likely be doing this will Logan and Kong: Skull Island as well.

I wish I had gotten on the audiobook train long ago. I've had several jobs (including my current one) where I can listen to my iPhone during work. Usually I've just opted to listen to various podcasts but, after making my way through How Did This Get Made multiple times, and more Joe Rogan and Marc Maron to last a lifetime, I decided to seek out an alternative. First up has been Stephen King's It and I'm amazing at how easy it is to intake the content. Plus, who knew Steven Weber would be such a damn fine narrator? His Pennywise is absolutely terrifying. I've got several books planned for after I finish It and I can't wait to fully take advantage of my audible account.

I love a lot of stuff that alienates people from me. Being a huge fan of horror movies, professional wrestling, and mixed martial arts has drastically decreased the number of people that I can socialize with. There are many preconceived notions when it comes to all of those things and it makes maneuvering through the world a tad more difficult. Yet these are the things that make me happy and that I'm passionate about so have no intentions of dropping them just to appease the general public. It just further shines a light on the idea of "if it makes you happy and it doesn't hurt anyone, do it." Just have to remind myself of that sometimes.

Alpha Brain is a bit of a miss for me. Joe Rogan has been plugging Onnit's Alpha Brain for quite a while now and, after hearing great things from many others, I decided to try it but unfortunately it just seems like a rich person's supplement. While I certainly notice the difference and would love to take it everyday, those differences are minimal, especially for the price per bottle. I just can't see it as being worth it at this time in my life.

Where the hell is the book news? I know, I know, I've been saying it's just around the corner and then nothing happens. Well there's a reason for that: I was originally going to post something a week ago summarizing what's going on for future books of mine but realized there's a certain anniversary coming up. Given that anniversary (supersecret) I thought it'd be much more appropriate to wait. So, I promise there will book news at the end of the month.
at April 22, 2017
Email ThisBlogThis!Share to TwitterShare to FacebookShare to Pinterest