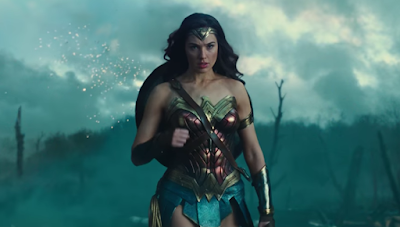 Wonder Woman ended up being a pleasant surprise. Even with the positive reviews/word of mouth, I was very worried about whether or not it'd live up. I didn't think the previews looked very good and I've always found Gal Gadot to be a disappointing WW. While the film likely wouldn't have worked just a few years ago (it is VERY reliant on CGI that wouldn't have been impressive prior to a year ago) I enjoyed what they did with it. Gadot and Pine's relationship is probably the best part of the film (hilarious, given the feminist slant that's been surrounding the film) and the action can be cool, if not a little formulaic and music video-y.

It's okay to not like people based on their political views. There's been this weird narrative going around that we can't judge people based on their political views and that it doesn't represent them as a person. Uhh...how is that? Political motivations are almost exclusively based upon our own moral values, so if someone has different moral values then you, it's okay to not like them. Is it okay to abuse/harass them? Of course not, but I dislike this narrative that if you delete someone off Facebook based on their political beliefs, you're not tolerant. No, I just don't have people in my life that completely clash with my moral values. It doesn't matter if their family/used to be my friends, if you're an asshole, I don't need to be forced to see your nonsense. So if you're a Trump fan and have been wondering why I deleted you, the answer should be obvious: I don't need someone on my timeline who's values clash with both my own and everyone else's that I'm truly friends with.

I finally have my DVD collection back together... for the most part. Ever since leaving for New Orleans in the Summer of 2013, I've been slowly bringing it back together. I got my Blurays in February of 2014 but had still been without all of my DVDs in that time. If you know me, you know that my movie collection is very important to me. It's a comfort and can instantly make a place feel more homey for me. So finally getting most of them back together this summer has been an absolute treat. You'll notice I say MOST because there is still a box which I don't have that is full of mostly my TV shows... oh and HALF of my horror. Yeah, I didn't bother looking for the TV box because I knew that I had most of those available to me via Hulu/Netflix/HBO Go, so I was fine with leaving them behind. Then, when I got home and put out my DVDs, I realized that my horror collection stopped at the letter N. This means that O-Z are unfortunately back in Michigan and I doubt I'll be getting them anytime soon. Oh well, at least I can get lost in movies like Audition, Dead and Breakfast, and Inside until then. (But no Sleepaway Camp... boohoo).

Baby Driver sticks with you long after its over. I have this weird relationship with Edgar Wright movies where, outside of Scott Pilgrim which blew my mind from the get-go, I'm not always completely blown away at first. Don't get me wrong, I loved Baby Driver and had a blast throughout the entire thing but, like Shaun of the Dead and Hot Fuzz before it, like a fine wine it needs some aging. It gets better the more time passes and the more times its seen.

I'm attempting to get more into golf. I've always enjoyed golf but always deemed it a rich man's sport and didn't bother much with it. After receiving a set of golf clubs as a gift from my Grandpa, I decided I would dip my toes in it a little bit. I really enjoy the sport and I can see how addicting it can be but the money aspect is such a turn off for me at this point. I've gone out a few times and it just seems a little farfetched to be spending so much money for such a short amount of time. I know that people who do it often buy rounds in bulk and that helps with the cost, so maybe that's something to look to in the future, but at this point, I'll stick to Rory McIlroy PGA Tour.

I'm moving on my own soon. I've lived with my brother the past four years and am finally having to go elsewhere. It's scary. I still have no idea as to where I'm going to live. Hell, I don't even know if I have to go back to Michigan or not. Colorado is expensive and I hate living with others. So the chances of me getting into a decent situation where I get along with my roommate doesn't seem high on the surface. But I'm powering through. It doesn't help that this is happening at the same time as a million other things (essentially the worst timing possible) but I'll make it through. Always do.
at August 20, 2017
Email ThisBlogThis!Share to TwitterShare to FacebookShare to Pinterest