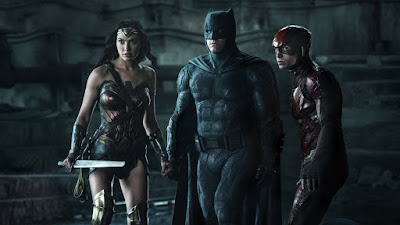 I feel like I need to put it right out in front that I really dislike the DC Cinematic Universe. I have given each movie a fair shot and was only able to enjoy one of them (Wonder Woman, which I find gets less impressive on repeat viewings). So you may be one of those people that don't have an issue with the melodrama involved in these films and just want to see a Superhero on the big screen. However, I think this is going to be one of the few times we can fall into the same category and enjoy the film in similar ways.

The usual problem with the DC Universe is that it takes itself far too seriously but this movie goes the complete opposite direction and goes insanely silly so the film finally is able to go from mediocre and therefore not fun to watch to the crazy mess it's become.

The silliness starts off right off the bat with what may be the worst scene that Batman has ever been involved in (yes, I'm even counting "Batman and Robin") where he's chasing some thief on what is supposed to be a rooftop but is an extremely obvious set. In fact, it's so obviously a set, that the scene itself feels like some kind of weird play. Add on Batfleck's very exaggerated performance this time around and it sets the tone for trouble early. Batman isn't the only character that was completely mishandled...

Wonder Woman becomes a complete joke of a character who's main character trait is that she misses her former love Steve Trevor (Chris Pine from her solo outing). To the point that she straight up brings it up out of nowhere and when it's not even really relevant to the conversation. Oh, she also has insane super speed now too. In fact, everyone that's not Batman has crazy Super Speed that makes Flash's character fairly useless.

Speaking of useless, why is Batman suddenly so useless? He is the butt of so many jokes and often just gets his ass handed to him. I really only liked the scenes with Bruce Wayne and would instantly groan whenever Batman was on screen. And what the hell was the deal with his suits? They looked so lame this time around. After how cool the suit was in BvS, I was surprised to see such a downgrade. It was especially funny when Diana had to pop his shoulder back into place and he just had his dark grey metal tits in her face.

The unintentionally funny moments in this film are so abundant its practically a comedy. They go to a Batman/Bruce Wayne reaction shot nearly anytime something happens and he always seems annoyed by it. They may as well start calling him Tony Stark and be done with it.

I love Joss Whedon and I think he's the only reason the movie is as fun as it is, but I'd love to see the complete Trainwreck that Snyder was directing. You can see there are hints of it in the movie, and those are usually some of the worst parts (overly melodramatic and slow).
at May 04, 2018
Email ThisBlogThis!Share to TwitterShare to FacebookShare to Pinterest