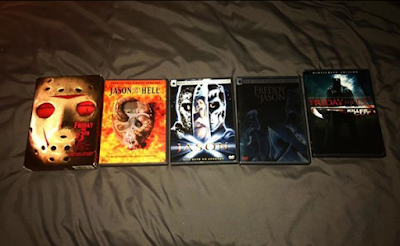 Another Friday the 13th is upon us and yet again I'm spending it with everyone's favorite drowning victim, Jason Voorhees. That's right, I can hardly let one of these days go by without watching one of my favorite horror franchises of all time "Friday the 13th." Don't get me wrong, it's not the greatest series to ever exist, but it's such dumb fun that I've always been drawn to it. In years past I've watched the entire franchise in a single day but I've since cooled off on doing that (maybe one day in the far off future). Instead, I pick out a few choice films and go for it. So what exactly did I choose this year...

"The Final Chapter" was a no brainer. It's legitimately good with some of the best atmosphere of any of the films. It has more style than any of the previous films and adds a layer of brutality. Next I threw on "Jason X" because I wanted some dumb fun. No, it's nothing amazing but dammit, I enjoy how silly it gets. I capped it off with the Remake, which may be among my favorite in the series. Hell, today it is. I just love all the elements that made it more than just "Supernatural Zombie" and brought it down a little bit. Makes it a tad scarier.

I actually added a new tradition this year without even really realizing it. See, we already had a Friday the 13th in April of this year, and I saw "A Quiet Place." Well, that film released on 4K and it was almost like fate, watching it yet again on that day. And, being how weird I am about watching certain films on certain days of the year, I think I may have added another.

And dammit if it's not deserving as all hell. The film is just a powerhouse from start to finish. It grips you with silence in ways that films really don't these days. And the acting is just phenomenal all around.

I'm not sure if you celebrate this day like I do but maybe you should start. Or don't. I mean, it's not they don't teach you super important survival tips or anything.