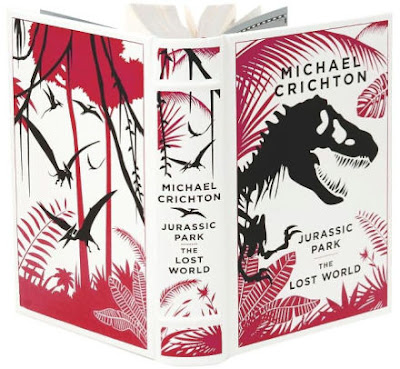 After a recent obsession with the Jurassic Park film series, I finally decided to take the plunge and read the books -- or rather listen to them. So I fired up "Audible" and entered Crichton's weirdly different while wholly familiar world. Now, I'm gonna get into some spoilers so if you're ever wanting to read the books (the first one is definitely worth it) then read no further.

The first book, "Jurassic Park" is very similar to the film of the same name. Most of the characters are all there and the basic skeletal structure of the plot is still all there. But it's all in the details and those details differ rather drastically. There's a whole element of the dinosaurs somehow being spotted in Costa Rica. This didn't really sit well with me because they're dinosaurs. They aren't ninjas. They'd be spotted and the secret would be out. But who knows, maybe the 80's were just a different time.

One aspect I really enjoyed with that is the death of John Hammond. It never made any sense to me that the guy who was responsible for all this madness never got his comeuppance. Well the book rectifies that in a big bad way because not only does he die, the character is a bigger prick than the film version could ever imagine being. He's just a billionaire who just did this scheme in order to get money. He doesn't care about dinosaurs. Very different from the film version who seems like much more of a philanthropist. 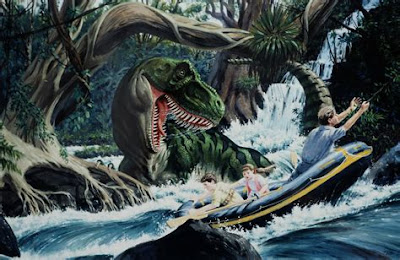 The second book, "The Lost World" had me intrigued before reading it for many reasons. The most important being that the film has never been a huge favorite of mine. It's enjoyable but definitely has its problems and is in no way a worthy successor to the seminal first film. So the book just HAD to be better than the film. Well...

I can't really say that it is. In fact, it's more frustrating than anything. Ian Malcolm gets brought back one to be just as useless as he was in the first book. I understand that Crichton wrote the book under different pretenses given that JP was such a success, but dammit give him something to do other than just talk about chaos.

And why shoehorn in those kids just to be Lex and Tim 2.0? It just felt like redoing something that worked well in JP that just didn't make much sense to repeat in this film. May have been Crichton commenting on sequels but I just saw it as lazy. Kinda like the whole "Ninja Dino" angle from the first book.

I'm glad that Dodgson finally was given his comeuppance (really like that word today), especially given what an unnecessarily evil he was made in this book. I mean, he literally pushes Sarah Harding off of a ship into the ocean and steals dino babies. He makes you seething by the end of it all. But he gets one of the more brutal deaths of the series so at least there's that.

One thing I'll give the movie is that the third act in San Diego is even more impressive after listening to this because it really just kind of ends. There's some excitement but it's not this grand moment like in the film. That would have really been exciting to see in Crichton's novel.

Overall, I wouldn't recommend "The Lost World" because it's just kind of bland. There's not a lot happening but if you want some loose ends tied up, and want a world where Malcolm stays alive, then read it. Otherwise, just stick with "Jurassic Park" and enjoy the story that spawned a beloved franchise. I know I did.
at August 03, 2018
Email ThisBlogThis!Share to TwitterShare to FacebookShare to Pinterest