Why The "Last Man on Earth" Concept Always Seems To Fail

It's a concept we're all familiar with: What if something happened and you were the last person left on earth. While usually the culprit is some deadly virus turning people into zombies/vampire things (I Am Legend), sometimes it just goes unexplained (The Last Man On Earth) So in the latest trend of "Try absolutely everything out on TV that we possibly can," Fox decided to create a comedy series on the subject.

And it failed. Miserably.

Sure, the pilot episode of Last Man on Earth had a lot of potential, and I see why the Network decided to pick it up. Will Forte is charming and one of very few people who could I could watch in a TV show where he's just talking to himself. But it quickly decided that it couldn't keep with that concept for long and, before the end of the first episode, we were treated to him coming in contact with another human being. See where the problem starts? It quickly showed, yet again, that the whole concept of the show is absolutely false. He is not the last man on earth. It makes everything seem completely pointless as he thinks that he is and draws so many plotholes. 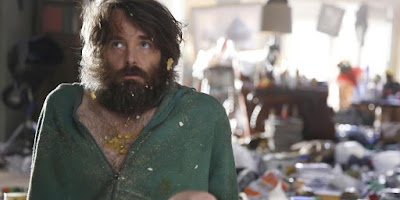 As more and more characters get introduced to the show, the more plot-holes it has. How is it that Forte traveled across the country, even into Mexico and Canada, and couldn't find a single living soul? Don't you think that he would have at least seen signs of life if someone was still alive? And given how long it would have taken him to traverse North America, you'd think someone would have seen the signs for "Alive in Tuscon" and been there long before he came back. We are accepting of it because we are told explicitly with the main title card that Will Forte is in fact, the last man alive. So taking that away takes away that trust. It just doesn't make any sense. And this is really the main problem with this show and movies like it: the viewer is lied to right from the get-go. Our lead is not the last man on earth.

Why is it we have the need to label something as such, when it doesn't carry through on that promise so quickly? Do the people who make these think that we would just get bored by one character even though that's the sole premise that it's marketed as? I think it has more to do with laziness. It's hard to create content for just one person, unable to interact with/play off of someone else so often the solution is to simply bring in other characters. I'd say it fails miserably for the most part and that's because it goes against the DNA from which the idea flourished.

NOT the book, I Am Legend.

Look at I Am Legend by Richard Matheson. This is often considered the ultimate "Last Man on Earth" story and with good reason. It lives up to its name. In this, we are met with the realization towards the end that he is in fact the last person alive and he will be a legend for that fact. There isn't another man in the entirety of the story and therefore lives up to its namesake; a rarity among these types of films.

Even the Will Smith starring I Am Legend fails to even capitalize on the concept, despite the source material being ripe for the taking. All they had to do was follow the story (modernizing it since it's 50+ years after the novel was published) and the payoff we all wanted would be there. Instead, they decided that they needed to throw the concept out the window and give us what amounts to just another action film with the same tired ending. It's a pity given how revolutionary it could have been.

There is still one thing that could save these types of movies, (in particular the TV show, TLMOE) and this is one that I hope others follow: just stick to the concept. If the show is about the last man on earth, then make sure he's the last fucking man on earth. Don't add a love interest and all these other people because of laziness. Think of conflicts that someone living by themselves would be faced with and create that story. The story that YOUR PREMISE dictates.

Please?
at June 09, 2016
Email ThisBlogThis!Share to TwitterShare to FacebookShare to Pinterest