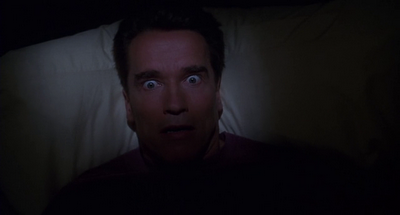 Welp, that was a failure.  While I did end up watching a lot of Arnold movies during the month of November, unforeseen events seemed to halt keeping the series up to date.  Both a mixture of school and mere difficulty in writing caused me to just end up scrapping it altogether.  At first I was going to just play catchup and mass-post a bunch of them but then I realized that, that's not really solving the problem at hand: it's fucking hard to write about a bunch of Arnold movies.

As much as I love them, Arnold movies are pretty much all the same.  He is Arnold Schwarzenegger and he's in an extreme situation whether it's killing aliens, attacking henchman, or stealing other people's presents from under their trees.  There isn't much in terms of range.  So the problem I ran into is really one of variety.  It was hard to write a review without it sounding the exact same every time. That's just the nature of Awwnold's movies and I can't really complain because I enjoy them so much but it was an obstacle which entirely derailed the project.

However, since I did still watch a lot of his movies this month, I figured I'd highlight a select few in short form rather than having an individual post for each.  Twins and Junior were two first time viewings for me and, while I'm grouping them together due to director Ivan Reitman and co-star Devito, they couldn't be at further ends of the spectrum.  Twins is hilarious, heartwarming and genuinely good.  Junior on the other hand is a tonal mess that never quite knows what it wants to be.  And worse, a movie about Arnold being pregnant, doesn't even live up to the joke of the concept alone.  I laughed once.  And that was just because Mr. S is the man.

Kindergarten Cop was a big surprise because even though I had seen it when I was younger I never was a huge fan.  But goddamn is this movie hilarious.  "It's not a TUMAH!"  The film owes a lot to it's young cast because without them, a lot of the jokes just aren't there.  These kids are funnier than kids in pretty much any other comedy.  They're natural and genuinely funny.  Nothing ever seems forced.  "Boys have a penis, girls have a va-gina."  Still, credit where credit is due:  without Arnold, you lose the backbone of the film as well as so many of the great classroom situations.

The biggest surprise of the month for me was the film Stay Hungry.  It's Arnold's first real film (I don't count Hercules in New York because it wasn't released till much later) and while he's hard to understand at times, his charisma is very evident.  Also, why didn't anyone tell me that Sally Field used to be a hottie?  She was always Forrest's mom to me so now it's like discovering a whole new person.  I don't want to get into specifics but there's a fight that felt more real than any action movie I've seen in recent years (outside of Bond and Bourne).  Seems as though most people haven't even heard of it but I URGE you to check it out.

Another problem I encountered with something I wanted to do with this series was a dissection of certain sections of his autobiography Total Recall.  However, that was back when I was still early on in the book and was relishing in the detail he was going into.  Unfortunately once his Hollywood years come up, the book becomes light and fluffy and little focus is on the films.  As someone who picked up the book mostly for his film career, this was disheartening especially given the level of detail he went into with bodybuilding, then later politics.  And while I like politics, it certainly put a halt to my reading as I quickly lost interest in the book once he starts his campaign for Governor.  This is at no fault to the author and more personal distaste for politics.

So there you have it, finally an explanation onto why I didn't continue the (now realized) overly ambitious blog series.  Lesson learned.  As for the future of this blog, I plan on updating it with whatever I want really.  Whether it's a movie, music, or even book review, I just plan on keeping the content up. Don't expect many month-long series' though.  Pidgeon-holing myself into just one category stifles a lot of creative thinking and general interest on my part.  So instead, expect randomness and all that jazz in order to keep with my goal of featuring plenty of content in the future.
at December 03, 2012
Email ThisBlogThis!Share to TwitterShare to FacebookShare to Pinterest