This has actually been a subject I've been meaning to write about for a while.  And I actually post-poned this blog post in order to not simply be dismissed amongst the many New Year goal posts that spring up on January 1st.

I'm not going to sit and pretend like there aren't preconceived notions when it comes to Yoga.  There are.  I know that firsthand and am aware that due to this, it's a little harder to reach the ears that have been exposed to them.  Before I started doing it myself, I always dismissed Yoga as just stretching and nonsense.  Actually, I had a pretty distinct thought as to what Yoga was and it greatly resembled this:

Okay, that wasn't EXACTLY the scene I wanted to show, but the original non-youtube pooped version was what I was going for.  Either way, some form of that is usually what people think of: some nutjob talking about being Zen and the energy flow of our bodies, and all that nonsense.  That's stupid. Sure, it may help some people to relax and meditate, but it's still stupid.  And that's precisely why yoga often gets dismissed.  These people usually taint the image and give it a bad rep.

I follow DDP Yoga (YRG Fitness) nowadays but I started off just watching some random series of videos On Demand from Comcast.  They weren't hokey, they were more exercise based but still focused on relaxation.  This was more my tune.  And I was finally able to get into Yoga due to how it was presented to me.  After switching over to DDP Yoga, I've got even more into it because it molds well with what I expect from yoga and that's the exercise.

I won't bore you with all the details about why exercise makes you happier.  It does.  Endorphins and all that shit.  But so many people don't want to exercise.  That's just too much work.  Going for a run?  I'd rather sit here and play Mortal Kombat till my fingers bruise and swell.  But what about exercise without doing much intense work?  I'm not going to say that Yoga isn't work, it is.  In fact, it can be extremely demanding on your body.  But YOU decide how hard you want to go.  Don't want to balance on one leg since you struggle doing so on two?  Fine, then do it on two.  Just work your way up.  That's the great part, it's very flexible.  Chances are, if you can't do one thing, you can do a less strenuous version of it.  And since yoga is mostly stretching, there aren't many excuses you can think of to fight it.

Here's an example of how far someone can go when it comes to doing yoga:

Now, I'm no Yogi-Master.  In fact, I always used to forget to do it or my laziness would just prevent me.  Not anymore.  I've taken it upon myself to do it at least once a day.  ONCE a day.  And depending on what I have that day, I may only do the 20 minute video.  But even in that 20 minutes I notice a difference.  My body is tighter, feels like it actually got worked out and I'm happier than I would be otherwise.  And that's the main thing: the mental benefits.

I'm a person who deals with a lot of stress.  A lot.  Even the simplest of things, I get stressed about and affects me far more than it would the average person.  But through this form of exercise, I'm no longer as much of a mess.  Even taking the breathing methods and applying it to stressful situations has helped me in ways that would have been impossible before.

Then there's the case of the Winter Blues.  It happens to so many of us.  There has nary been a winter season that it hasn't crept up on me.  It just happens.  Snow is covering the ground, most remain indoors, and there's not a whole lot to do.  Depression just clings onto that.  And with the terrible weather it's easy to dismiss the gym due to simply not wanting to go out in the cold to get there.  I get it, I've been there.  Here's the simple solution: you can do yoga ANYWHERE.  Your living room, your bedroom, your basement.  Wherever you have a 3x6 area to do activities, bunk that bed and do it.

Now, you may be saying "But I just don't have the space for that."  You do, trust me.  This is the set-up that I use: 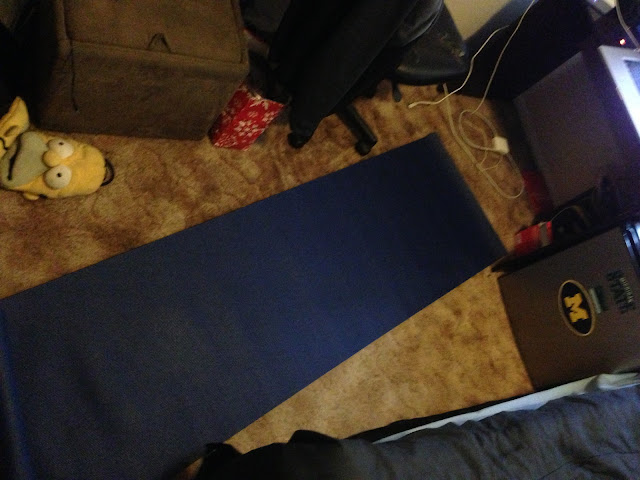 Not exactly the most appealing area but it gets the job done.  And that's all that matters.  Who cares if it looks like a yoga studio?  As long as you can do the poses comfortably, then no other excuse matters.  And even that mat is longer than the average (I have the longer one--I'm tall...shut up) one so you'd need even LESS space than that.

I've had my foot in yoga for about a year and there's been no looking back.  Not once have I thought of it as a waste of time.  EVERY time I do it, I feel awesome afterwards.  Now the main thing for myself moving forward is to keep up the routine.  It's something I would love, and plan, to carry through my life into the future.  And even if this post doesn't make you want to go out and do yoga, that's alright, that wasn't the purpose.  The main purpose here was to educate and break some of the odd characteristics associated with yoga.  I figured I'd show you the positive benefits from someone who I would consider pretty regular (did I just refer to myself as regular? Doesn't that make me...irregular...wait?)   EITHER WAY, if I've done that, my job is done.

Salmon Rolls.
at January 03, 2013
Email ThisBlogThis!Share to TwitterShare to FacebookShare to Pinterest