Lord of the Rings Day: The After 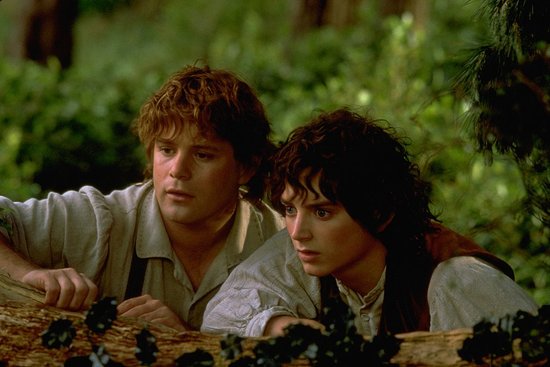 As I type this I don't want to even be looking at this computer screen.  My eyes hurt from staring at the TV all day long.  The concept doesn't seem that difficult at first but then just thinking out about it--really thinking about it.  It becomes daunting.  Not moving for 12 hours, just plopping your ass down on a couch and just watching an LCD screen.  Sure, I got up and did various things throughout, and it wasn't like I was forcibly placed there but it was rough.  I stretched when needed and even did pushups when becoming restless.  And that's how I made it through.  I didn't just sit there.  Otherwise, I'm pretty sure my back would have screamed out in agony and my legs would have fallen into a deep, dark slumber.  That's physically--mentally...

My mind, after dealing with so many different plots and stories evolving throughout the entire day on Middle Earth, began just to simply melt.  By the end of the epic showdown, I was simply sitting there, drool forming below my chin, staring at the screen in child-like astonishment.  This was not just a movie series, this was the ultimate experience in entering another world.

I had plans to watch Cloud Atlas tomorrow.  That's not happening.  I seriously don't think I could even sit through something that doesn't star Jason Segel or Hank Hill.  My attention span just won't allow it.  It needs a break.  I broke it.  This happens every time I do these marathons (the fourth since the release of the extended's) so I've grown to expect it.  But seriously, time to go watch some King of the Hill and forget about high fantasy for a bit.
at January 03, 2013
Email ThisBlogThis!Share to TwitterShare to FacebookShare to Pinterest