Lord of the Rings Day: The King 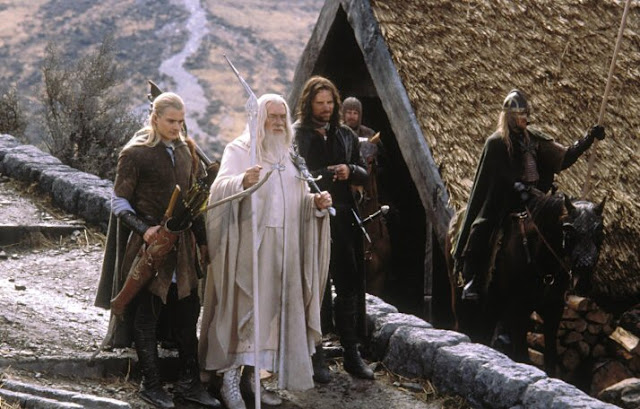 I know I'm just beating a dead horse but I'm going to just keep saying it until you get the point: Wow, this looks good.  If you love movies and care for quality then you have no excuse but to own this stunning achievement in cinema on Blu-Ray.  It is near reference quality.

The sheer scale of this film is impressive.  There are often-times hundreds, if not thousands of people (orcs) on screen at the same time.  Just makes you really glad they didn't do this series any earlier than they had.  Otherwise the story wouldn't have been done justice.  The term epic was made just for this series.  I feel a little guilty anytime I use it when referring to another film because chances are they would never reach the levels of epicness that The Lord of the Rings reaches.

Return, in particular, has more than it's fair share of moments.  Whether it's the Witch King fight, Gondor's last ride, or the entire end segment, it's hard not to catch yourself with an open mouth and dropped jaw.  "No man can kill me." "I am no man."  It's epic.  Get used to it.  Your mind gets blown by the various parts like this, just reeking of awesomeness.

There I went again, trying to come up with a negative for the thing I'm actually reviewing and going back to something else.  Okay, some parts get cheesy.  The nine different endings can be infuriating (god dammit, will you just end it once Frodo gets on the boat!) but it's easily forgiveable given all the insanity that was just delivered the previous 12 hours.  Peter Jackson, you are a god.  And while you haven't quite gotten back to this peak, here's hoping the rest of The Hobbit trilogy works it's way up to LOTR levels.
at January 02, 2013
Email ThisBlogThis!Share to TwitterShare to FacebookShare to Pinterest