Conundrum of all Conundrums

Here I sit with an episode of my new favorite TV show, Maron, on the DVR ready to watch it.  Only there's one problem:  I can't find the remote to save my life.  The past few days have been a daily struggle of cleaning and looking under random things in order to find this piece of machinery that I can't seem to live without.  But I've had absolutely no luck.  I've looked under the couch, in the couch, in my room, under the TV, in the studio, even in the bathroom and still nothing.  It has up and vanished and I feel ill-equipped because of it.  And this is the second time.

Take Sunday night for example,  it was the night of a WWE paperview but also a brand new episode of Game of Thrones.  Being that I treat WWE like a real sport, in that I don't like watching after it's already aired live, as usual (except for when Breaking Bad was on) I chose Rasslin over my Sunday night show.  However, after the paperview was done, I was ready to catch up on the latest adventures in Westeros.  I even had two options for viewing it, I could watch it on the DVR or On Demand.  But oh wait, no remote.  "Tyler," you're saying "don't you have an TV you can control with your voice?"  Why yes, you, I absolutely do and you know how much that helps me?  None.

I can turn on the TV, turn it off, change the channel and go to whatever meaningless apps I want but I can't access the DVR which holds my TV shows on it.  It's almost like I'm being blackmailed by my own remote.  Did I not pay enough attention to you?  Are you jealous of how much you're being neglected in favor of just using voice commands?  Is this how you're taking it out on me?  Am I directly talking to a remote on my blog? 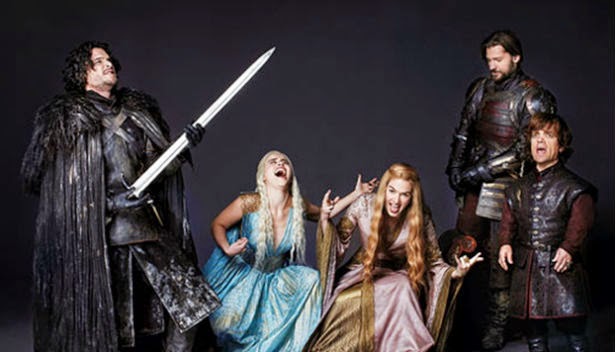 Now, I'm not going to act like I'm a person who doesn't use the internet to facilitate the procuring of certain media items but dammit, I don't want to have to torrent if I don't have to!  But you know what I had to do to watch Game of Thrones, even though I had it on my DVR, had it On Demand, and had access to it through HBO Go through my Xbox?  I still had to torrent that sonuvabitch.  Not having the remote took care of the first two but then HBO Go wouldn't work because Comcast kept having an error everytime I tried to access it.

I had legal means to watch Game of Thrones the night of airing but they were not working.  And social media is a bitch.  I had to resort to illegal torrenting just to be able to watch the episode.  Are they still getting points for me DVRing it?  Yes.  Did I try many different routes in order to watch it legally?  Of course.  Yet if I were to be dumb enough to leave the torrent open and seed out on an unsecure server, I could potentially be sued by HBO.  All because I lost my remote and am impatient.

I really need to go outside more.
at June 08, 2014
Email ThisBlogThis!Share to TwitterShare to FacebookShare to Pinterest