Don't Read If You Haven't Seen Game of Thrones S4

Is that title clear enough?  Just in case it's not....

DO NOT READ THIS IF YOU HAVEN'T SEEN SEASON 4 OF GAME OF THRONES!!!!! 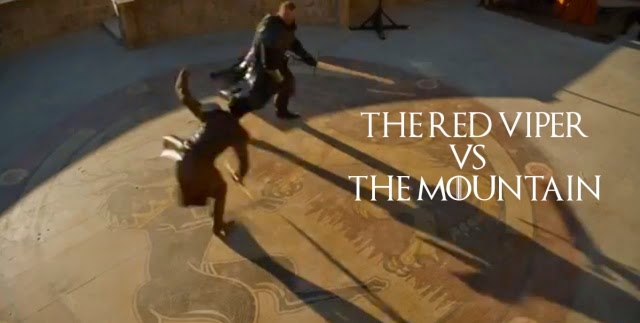 Okay, now that we got that out of the way, I'll be the first to say that last nights episode fucked me up.  Coming from someone who has read the book, it's hard to still be shocked when something happens since obviously I already knew about it.  Not the case with this battle.  If anything the fact that I knew what was going to transpire just made it worse.  There was only one problem: apparently I had forgotten the exact manner of death.  For some reason something in my mind kept saying that the Mountain cuts Oberyn down with his broadsword but instead what happened is something I've been playing in my head all day.

Now, I would consider myself pretty well-versed in the world of gore and make-up effects.  I've been seriously into horror films since a young age so I was long desensitized to violence.  With that said, much like the Red Wedding last season, I found myself becoming physically ill when the episode had wrapped.  Not only had one of my favorite characters bitten the dust but it was done in such a way that it literally upset my stomach.  Seeing The Mountain first shoves his fingers into The Viper's eyes, then full on smash his head between his hands... wow.  That wide shot of the two bodies laying next to each other, Oberyn's head just a pulpy mess, it's stomach churning. 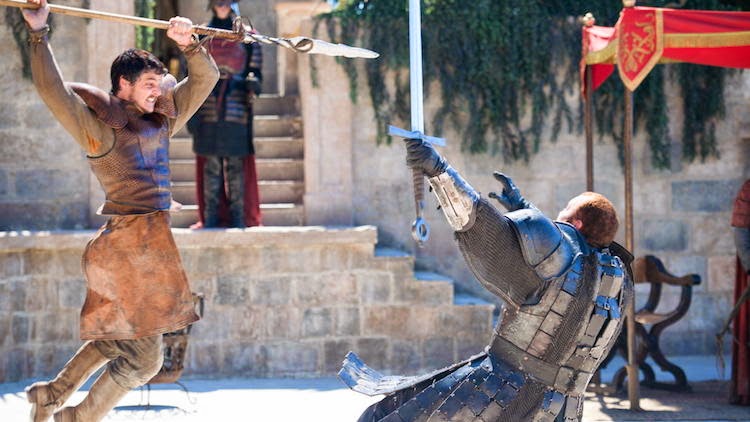 I can't help but think of all the people that not only hadn't read the books but also those that can't handle violence well.  If my own reaction is anything to go off of, this is a scene that should be sticking with them for YEARS to come.  The brutality of it, the shocking twist near the end, and really just everything that's built up to this moment.  We've seen The Mountain in action and know how dangerous he is.  No one else even seems close to him in skill yet here comes Oberyn and he completely controls the entire bout until the end.  But his cockiness gets the best of him and he loses it all.  His screams and that crunch will go down as one of the most pivotal and shocking moments of the series.

The pure fact that the implications of the fight, with Tyrion now set to be executed, seems to be lost amongst the actual fight itself.  That just shows how good this scene is; you're not left worried about Tyrion, you're left thinking "Holy shit, Oberyn just got fucking slaughtered in the worst possible way."  But now as it settles in and we all sit back and think about how Tyrion, aka everyone's favorite character, is now going to be executed, the final two episodes shall have a feeling of tension unmatched which, after The Red Wedding, is saying a hell of a lot.
at June 02, 2014
Email ThisBlogThis!Share to TwitterShare to FacebookShare to Pinterest