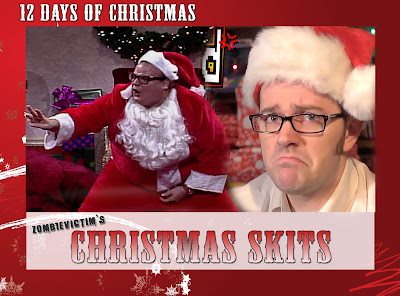 Talk about a New Age segment! I figured this would be a good way to cover youtube videos/SNL skits/whatever the hell else that I deemed to be a good addition to Christmas. I also wanted to be able to showcase some other moments, and although they aren't something you need to watch every year (The Essential Movies 100% should be) they're still a nice time time filler to get you in the holiday spirit.

I enjoy Angry Video Game Nerd far more than I should given how little I've played of the games that he usually goes over, but something about the style of the videos has always appealed. So it was great to see him do a whole 12 day series for the Holidays and angrily review 12 different games.

You can't really go wrong with having Chris Farley play a motivational Santa, complete with his usual sidekick David Spade. There were loads of SNL clips to choose from, but this one always stood out, mainly because everything Farley does is absolutely hilarious.

This is a creepy video. Let me just warn you before you even attempt to watch it. MonkeyandApple is a youtube channel I've been following for a while and really just wanted to include one of their skits. It's not their best but it is hilarious. Also, I find it odd saying "their" when it is one guys channel but that's the name, so I'm sticking with it.

Another youtube channel that I've been following since High School. This is actually the main reason that I came up with this idea because this skit popped into my head, even though I hadn't watched it in years. Their popularity has dwindled in recent years, but they're still putting out great content, so I highly recommend checking them out.
at December 20, 2015
Email ThisBlogThis!Share to TwitterShare to FacebookShare to Pinterest