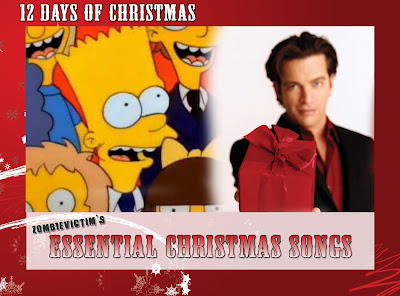 Oh yes. I'm going there. Every holiday season we are treated with the radio (wait, do people still listen to that anymore?), okay the internet, being bombarded with X-mas tunes. I worked at Michael's during the Christmas months and it was filled with more holiday songs than I ever even knew existed.

There are so many different versions of all the classic Christmas songs out there that it's hard to pick just one. And really, with so many different versions out there, it's really just a matter of environment as to which you prefer. If you grew up with some Bing Crosby "Jingle Bells" then that's perfectly fine. It's also fine if your preferred version of the song is The Joker's rendition from Batman The Animated Series. Christmas songs are so reliant on childhood nostalgia and trying to pass on traditions to the younger generations, that I felt it would be silly not to do my own favorite holiday song list.

I blame my step-mom as the reason why I enjoy Harry Connick Jr. Christmas albums. As soon as she entered the picture during Christmas time, she was filling the house with some HCJ. I think my younger self was probably annoyed with the music, since I thought there was already enough on the radio (back when it was actually listened to!). It wasn't until years later, while reflecting, that I realized just how much I enjoyed all of his renditions of classic X-Mas songs. This one in particular always stood out to me above the rest and I hope you can understand why.

Sure, the original "Jingle Bells" is a classic but no matter what, the version that always enters my head is Bart Simpson's rendition. Sure, a moment may pop in where I think about Mark Hamill's Joker belting it out as he's riding a giant Christmas Tree, but otherwise it goes right to the first ever episode of The Simpsons.

Okay, okay, so with the inclusion of this song on the list, I could have titled it "Essential HOLIDAY Songs" but you know what? Fuck it. The theme is "12 Days of Christmas" and I still say this falls under the umbrella. Don't think so? Boohoo it's my list. Anyway, the song itself is probably Sandler's best ever (is there even really competition?) and there are many different versions, but this one has always been my favorite.

I love me some old school X-Mas songs and there's nothing quite better than Bing Crosby's 1954 classic. I still have yet to see the film from which is comes from, but the song has been featured in more than enough pop culture to have it completely intertwined in the Holiday season.
at December 18, 2015
Email ThisBlogThis!Share to TwitterShare to FacebookShare to Pinterest