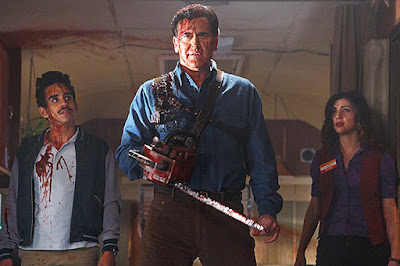 Yessssssss, it's finally here! I can't tell you how many times I saw news on an "Evil Dead 4" and just rolled my eyes. There was no way it was going to happen and people just needed to accept that. Then they announced a new TV show.

This show is everything you could possibly want from an Evil Dead TV series. It's Ash-centric with some truly imaginative demonic scenes. There's plenty of gruesome bits, and also that trademark dark humor. And it does a great job of introducing new characters fluidly into the pre-established world without hiccups. I love just how much of an asshole Ash is. I mean, the Deadites are released again because Ash got high and some girl wanted to hear poetry so he read from the book of the dead. How ridiculously awesome is that?

I get the same type of vibe from this TV show that I did from the "Freddy vs. Jason vs. Ash" comic series. It's pretty gory, with a high body count, but with Ash going through hell to ultimately save the day. I expect this show to follow a similar path and some of the side characters could easily be getting the shaft toward season's end. Either way, I'm on for the long haul and can't wait to see where the series goes from here.
at October 31, 2015
Email ThisBlogThis!Share to TwitterShare to FacebookShare to Pinterest