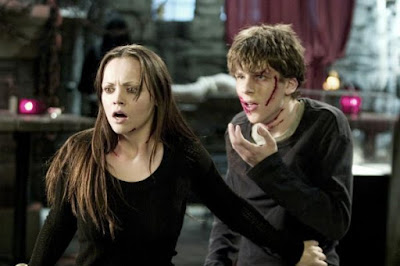 That picture brings back memories. It was used in Entertainment Weekly and just about every movie website used it when they reported on it. In case you weren't aware, this movie was supposed to be a really big deal. A werewolf movie -- a genre known for misfires -- written and directed by the team that brought us Scream. It was going to be the 2000's version of said slasher hit and we were all going to be amazed. How stupid we were.

It had been so long since I've seen this movie, and while I love bad movies, this one enters the territory of "So bad, it's awful." Oh don't believe me? Jesse Eisenberg literally howls at a bunch of dogs outside his house. Then there's the dog that turns into a ridiculous CGI abomination with the explanation of "my dog bit me."

Even the incident that sets the whole story up comes out of absolutely nowhere. We don't know anything about how the story is, have no sense of tone and suddenly, midsentence and without much forethought, they're in a car accident. It's not like it was so sudden that they were going for shock factor, because it leaves no impact whatsoever and instead you're just left wondering what in the hell just happened. And this is all within the first ten minutes. The movie just becomes even more of a mess from there.

The lack of logic runs throughout. There's a scene with Mia where the werewolf chases her around this building that just minutes before we saw was FULL OF PEOPLE. How is no one hearing her scream? It's like a five minute scene where suddenly the entire building is abandoned and empty. And she makes stupid decision after stupid decision.

Then there's the wrestling scene where Jesse Eisenberg, at school wrestling tryouts, starts doing a whole bunch of professional wrestling moves to impress everyone and get on the team. He's doing jackhammer suplexes, hurricanranas, and slew of other things you'd never see at an amateur wrestling tryout. It was a joke. Then there's one of Ricci's co-workers who decides she needs to OPEN UP THE BATHROOM STALL EVEN THOUGH RICCI IS TELLING HER NOT TO. Who the fuck does that? "Oh hey, I know you're in a super private area and are probably pooping, but I'm gonna open the door even though you're telling me not to. And we're at work so this will probably get me fired." It just lacks all logic.

If you were to look at the cast on paper then you may be convinced that it would at least be somewhat entertaining but no, everyone is awful and makes it surprising that they ever continued acting. Do I sound annoyed with this movie? Well that's because while I knew that it was not a good film, I was expecting to enjoy it on a so bad it's good level. Nope, it's truly just awful dreck.

Every aspect of the movie is bad. The structure, the lighting, the editing, the music, the acting. I just don't understand how a major Hollywood studio could actually produce such dreck. It's honestly one of the worst movies I've ever seen. I feel stupider for having put myself through it for the second time in my life.

One day there will be a documentary made chronicling how a film directed by Wes Craven, written by Kevin Williamson and starring Christina Ricci and Jesse Eisenberg turned out so bad but until then, we're just left trying to figure out what in the hell went wrong.
at October 02, 2015
Email ThisBlogThis!Share to TwitterShare to FacebookShare to Pinterest