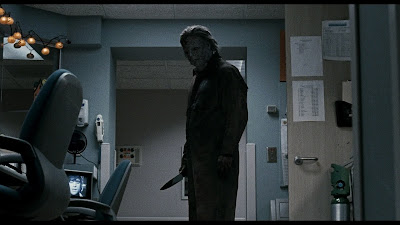 Holy balls this movie is bad. I remember really hating it, but I didn't realize what a poorly made film it is. There are a lot of choices that make me question if any executive's actually gave this movie a look before Zombie gave them a cut. Because the writing is on the wall with every shot. There's a particular scene towards the end of the film that feels like it was edited in Power Point. And yes, I'm aware of what Power Point can do. That's the joke.

There's an Academy Award Winner in this film (Viola Davis) and she screams like she's in a Key and Peele sketch. So you can only imagine how much the rest of the cast stacks up. Scout Taylor Compton gives one of the worst performances I've seen in a movie. While I didn't have much of an opinion of her in the first film, this whole "broken Laurie" angle that Zombie was going for doesn't work when the actress is so unbelievable when she's hysterical.

And you've got to love how Zombie totally negates both his first film, and even the first twenty minutes of this film. What do I mean by that? Well two of the characters that you see die horribly in the first, are suddenly alive and kicking in this one... only to be killed off again. So what was the point? It's not like they were essential to the plot, quite the opposite in fact. Then there's the weird instance of the beginning of the film just being one giant dream sequence. So there's no reason to actually be invested in anything happening during the hospital sequence, which oddly enough is actually the best part of the movie, just adding fuel to the fire of hate.

If you like this movie, then I'm sorry but you have no taste. I really don't say that lightly, and usually just view film as such a subjective medium. But no, this movie is objectively bad. It's poorly edited, acted, plotted, and even shot. This was clearly made by someone that just wasn't told "no" enough and was the last straw for me as a viewer. I haven't seen a Rob Zombie film since Halloween II and have no intention to. If his track record is any indication, it'll just be tasteless smut.
at October 26, 2015
Email ThisBlogThis!Share to TwitterShare to FacebookShare to Pinterest