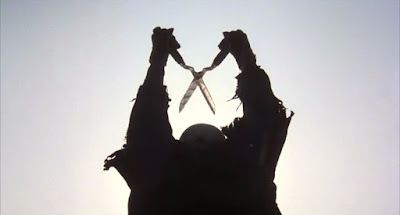 I first heard about this movie through Bravo's 100 Scariest Movie Moments. They hailed it as one of the biggest special effects horror movies of the 80's done by none other than horror maestro Tom Savini. To say I was excited when I finally got my hands on a copy would be a little bit of an understatement.

Really it's just a simple revenge story. But it's a revenge story where you understand both sides in a crazy way. Obviously the kids didn't mean for him to get burned alive and were just trying to scare him. Yet to Cropsey, he's being burned alive by some little shit teenagers so in typical fashion he goes and blames all teenagers for it. And I love the natural progression of the story. One of the main problems with horror movies are unrealistic character motivations and The Burning does a good job of letting everything unfold as it should, without forcing any ridiculous twists.

The characters and the dialogue always stood out to me as being shockingly good for such a low budget horror movie. Good dialogue is a lot harder than people give it credit for and the banter between the campers excels beyond the standard "Friday the 13th' riff.

And they kill off a shitload of characters in very close succession. After so much building you'd think they would spread them out a little more but no, they end up completely taking out a group in one big go and its one of the ballsiest moves I've seen in a horror movie. They still have such a high body count that it's hardly notice so the move is more commendable than anything. My favorite part of the scene is how much of an impact the shears have due to having it hit up against physical objects repeatedly and show the reality, before cutting to a prop knife/limb. It's all the genius of Tom Savini.

I really like this movie and am truly shocked it hasn't been given the remake treatment but I'm grateful for that. At least for now.
at October 04, 2015
Email ThisBlogThis!Share to TwitterShare to FacebookShare to Pinterest