I honestly can't believe I'm even doing this on top of everything else I have going on (finishing a book, 31 video review for WIGS, a top 10 video, and a weekly Fantasy Football video) but I figure, what the hell? I'm only going to have x amount of free time so much in my life, so I may as well do something I can look back on with enjoyment. I always get a kick out of going back and seeing my reviews for the last time I did this. They'll probably be short like the old ones but who knows. No limitations!

It'll be a little confusing since that means I'll be doing two separate 31 film horror lists and there could be some overlap but whatever. Halloween is awesome. Let's get to the main course... 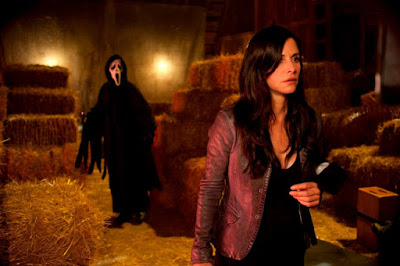 I saw this in theater at a pretty shitty time in my life. I loved the Scream series but wasn't expecting it to blow me away. Instead I immediately went home and got my hands on any info about the movie possible. I was obsessed. I loved the twist, I love how they threaded in talks about remakes without having gone through with an actual remake. We still have all the original characters doing their thing and bringing the "Screaminess" to it.

I hadn't really realized it until this most recent viewing but I really wish a similar story had been done for the TV series. Rather than going with a super generic backstory, I would have liked for it to exist in the same world as the Scream movies. And yes, it hasn't been stated whether or not Woodsboro exists in the TV show--though some people are saying it is. But doing it as a continuation would have made more sense and is a big reason why Scream 4 works so well.

My one big gripe with the film is the ending. No, I'm not mad that Jill and Charlie are revealed as the killers. I just wish that the entire hospital scene didn't happen. While it's a moot point now since the series doesn't look to be continuing (until the inevitable remake in a few years) the intrigue of Jill being out there, having finally succeeded where so few others had. It would have been refreshing and made for a unique Scream movie where we actually know who the killer is. Or do we?

Okay, sorry. I'm not pitching that movie, it's just something that always goes through my head. Plus, I was really hoping Kirby would be back for it too. Oh well.

Ultimately I really love this movie. The only film in the series that I enjoy more is the original and that's probably because of how it pays its respects to the it while still becoming its own thing. If only the TV series had done the same...
at October 01, 2015
Email ThisBlogThis!Share to TwitterShare to FacebookShare to Pinterest