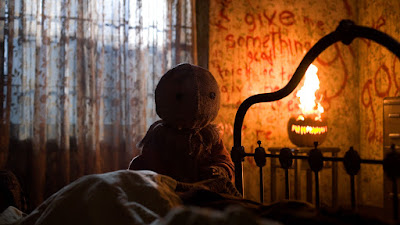 I had planned on this being one of my Halloween movies but I just couldn't wait any longer. There's nothing quite like a horror film that completely envelops itself in Halloween. And this film does that and more. Better yet, the entire film is about punishing those that don't treat the holiday with respect. Want to take your decorations down early? Ya dead. Want to pull a prank rather than paying respects to the dead? Well guess what, you're dead. Want to knock pumpkins around and be an asshole-- okay, you get the picture.

One thing that I had failed to realize in my past viewings is just how layered the film is. You can hear the "Disney Princess" girls wooing, as they drive past in the beginning of the film, we hear the werewolves howl before knowing of their presence, and are given a good looparound back to the beginning of the film (the most obvious of them all). I can only imagine what the writing process of this must have been like, what with the intricacies of the stories at play here.

It's really a shame that we never got a sequel, although I have the comic that was just released pulled up on my Kindle right now, so we'll see if that lives up to the story.
at October 28, 2015
Email ThisBlogThis!Share to TwitterShare to FacebookShare to Pinterest