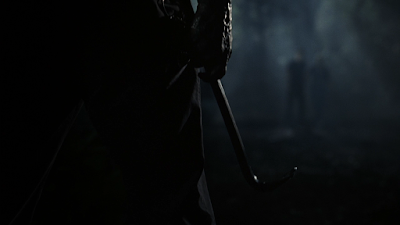 Is it weird that I was actually pretty excited when this movie came across my Netflix? It's one of those films that was released right before I was able to see horror movies in theaters. My dad used to let me watch films he'd already seen and deemed "not bad" aka no surplus of nudity, or language. But this was a transitionary period. I was seeing lot more horror movies because he never had an issue with violence, as I had gotten into the filmmaking process at a young age and therefore understood how fake everything was. Unfortunately I wasn't quite to the point of going to the theaters on my own, especially not to see what would clearly be terrible schlock. So I ended up missing out on Venom.

I'm not really sure what I was expecting but it was every bit as terrible as a film about snakes possessed by killer spirits that turn someone into super grey killer could be. The acting is terrible from every person involved, which isn't surprising given that most of the cast is a bunch of no names. Still, I was hoping maybe they'd get some moments right, but no. Every moment is played wrong and just reminds me that I'm watching a terrible movie.

The kills are so fucking lame. They tease one with Bijou Philips that you think is going to be absolutely brutal and even show the damage that the weapon can do beforehand. And then they just cut to black and don't show it. What's the point? This movie could have very easily been PG-13 with a couple cuts. I'm not sure why they even decided to go the hard R route.

There's nothing that makes this movie anything other than forgettable schlock, which sounds about right if you've seen just about anything from it. Oh 2005.
at October 15, 2015
Email ThisBlogThis!Share to TwitterShare to FacebookShare to Pinterest