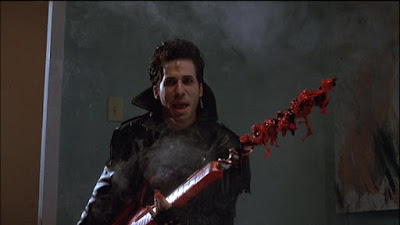 I have to admit, I only half paid attention to this film. I had rented the original Slumber Party Massacre when I was younger and didn't really get it then. It seemed more silly than anything. I don't even remember being too impressed by all the nakedness. Deciding I needed to experience the full trilogy, I ran through them all this morning. The first was pretty much how I remembered, only I was much more impressed with the girls. It's kind of absurd how gorgeous they are, and they partake in like a five minute shower. I somehow "get" why this series is an underground classic.

I had such high expectations for this film, but not in the way you're probably thinking. I remember hearing that 2 had more tits and better gore than one and was an all-around more fun time. And while it does seem like more fun is being had onscreen (probably as a result of off-screen fun) it doesn't really outdo the original. Especially when it comes to nudity. The girls that do go nude, aren't the ones you want to see and the ones you want to see (like Playboy Playmate Kimberly McArthur, who had a no nudity clause in her contract). After the shower scene from the original, my expectations for this one were too high, I suppose.

It's certainly more ridiculous than the original, so I'll give it that. The killer being some crazy 80's dude with a guitar drill was so absurd but gave it some unique quality that helps it stand out. And given that the series was already pretty stupid due to the drill being the main weapon used -- something would likely be the worst possible killing tool ever, given its awkwardness and the fact that it runs on gas. It may be the easiestSo absurd. Which is all I can really ask for. At least it doesn't fall by the wayside with so many other generic slashers and at least does SOMETHING to try and separate itself from the pack, even if it doesn't entirely work out.

And how funny is the lead girl? She's supposedly going through this psychologically traumatizing experience and keeps getting haunted by visions yet every time she sobs, it sounds like she's laughing hysterically. Then a giant pimple pops all over her face and she thinks that her friend died because of it. Not a lot makes sense in this movie until you see the name of one of the producers.

Now everything makes sense.
at October 12, 2015
Email ThisBlogThis!Share to TwitterShare to FacebookShare to Pinterest