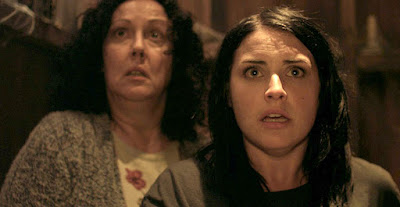 I'd seen this on Netflix but I just never could seem to pull the trigger. Then I needed more movies to expose myself to and it ended up being on a list of recommendations. So it's weak concept finally won me over with positive word of mouth. Really, all that I needed to know was that it was from New Zealand and their track record would have been enough to win me.

I always thought the concept of house arrest was intriguing for a haunted house movie, and I think it's fully taken advantage of, drawing parallels between cabin fever and actually seeing ghosts. It gives those that don't believe of the haunting a little more leeway and doesn't immediately just label them as assholes that should be listening to our poor protagonist.

The lead girl in this looks like a girl I recently dated. It was eerie but made me crack up though. My luck right? Still, I ended up enjoying the overall dynamic of the characters at play. They feel stereotypical while branching out in more dimensional ways. I really like that as soon as one of the characters sees something out of the ordinary, they don't just shrug it off, they treat it like it's totally out of the fucking ordinary. As it should be in horror films but so often isn't.

I saw this labeled as a horror/comedy and I'm not really sure if I understand that designation. Sure, there are funny moments but they're small and situational. The rest of the movie plays out like a standard horror movie. Just seems like an odd decision.

I'd call most of the decisions made in the second half frustrating at best but then that ending comes and I applaud the film for doing something different. It really turned the tired ghost story genre on its head and gave it new life.
at October 05, 2015
Email ThisBlogThis!Share to TwitterShare to FacebookShare to Pinterest