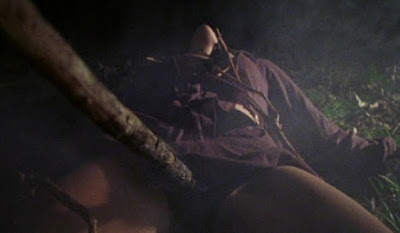 This was actually a pretty special viewing for me because I was able to watch it outside, next to a campfire, with the moon out and shining bright. It was quite an experience, especially given the film's content. It may now be my favorite way to watch a horror film, given just how involved it really gets you, especially when the film itself is based outdoors.

It's not hard to absolutely love this movie. Even when it gets cheesy, it is so over-the-top disgusting that it draws you into all the horror. Watching the film with a great surround sound elevates the film a ton, but given that we didn't want to disturb the neighbors, we had it relatively quiet during this viewing. Still, the effect of being outside was more than enough to make up for that. Especially during the tree raping (lol).

This just made me even more excited for Ash vs. The Evil Dead which comes out on Halloween. I don't have Starz so I'm not sure how I'll be watching it, but dammit I'll find a way. I need more Ashley Williams in my life.

at October 23, 2015
Email ThisBlogThis!Share to TwitterShare to FacebookShare to Pinterest