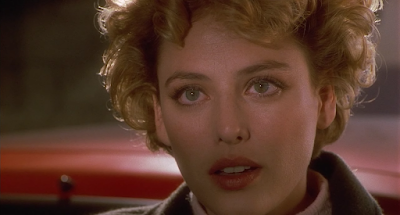 I had stayed away from Candyman for years -- I actually think that the first time I saw the movie was chronicled during the last 31 Days -- but I was given an opportunity I'm not often given: to watch a horror film with some who hadn't seen it before and had always wanted to. That was exciting enough prospect for me to want to write about it all again.
It still amazes me the amount of balls this movie has. It really just takes dark path after dark path and doesn't let up the entire film. Virginia Madsen just knocks it out of the park and is probably one of my favorite horror heroines of all time. Her character goes through a really interesting arc and impresses me to no end. She's such a unique lead and one we don't see enough in film.
And can someone please give Tony Todd another horror villain to convey please? Because in case you weren't aware, he kills it. Both figuratively and literally. Heh. Get it? Because he's Candyman and he gave a stellar performance?
Yeah, okay, I'm going to bed now.
at October 16, 2015
Email ThisBlogThis!Share to TwitterShare to FacebookShare to Pinterest