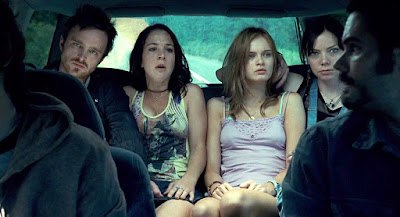 This was actually a first time viewing for me and was quite the fan. Sure, it's not quite the same effect as the original but I was surprised at how well it translated to modern times. Knowing where the story was going kind of took the tension away from me, but I'm glad they made the changes that they did.

It was so weird seeing Aaron Paul in this. I assume that this was all prior to Breaking Bad which makes me kind of sad since it likely means he won't be making a return to the genre. Still he's awesome in the role and really plays a psycho well. Speaking of weird, Garret Dillahunt as the main psycho! Now, I watch a lot of Raising Hope so to see him pop up and be terrifying took a little bit of getting used to. Then Riki Lindhome was naked throughout half of her role! What on earth is going on with this movie and why is throwing so many polarizing things my way?

I was a little disappointed in the cinematography, which is a little odd to say. I guess I was just really expecting more ethereal shots. Instead it's too clean to be visceral and too shaky to be creative. Which ultimately made it feel a little pointless. Why make the movie if you're going to stick so closely to the original? I found it even more odd reading that it was originally intended to be a direct-to-dvd release. It never loops cheap, which is more than I can say for the original.

When all is said and done it's a little odd that this movie was even made. What was the point really? Were they just hoping to cash in on the name and ride off into the sunset? I'm not sure what happened but here's hoping Craven made some solid dough off the deal.
at October 09, 2015
Email ThisBlogThis!Share to TwitterShare to FacebookShare to Pinterest