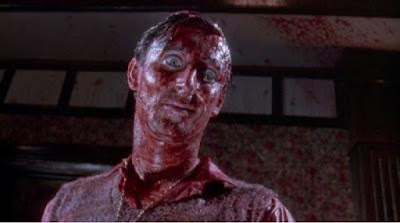 It's insane just how violent this movie is. And just when you think it can't get any more insane, a baby crawls out of someone's head. No really, that actually happens in this movie. I'm telling you, it's fucked up. Still, it's done in such an over-the-top way that it never sways into disturbing territory. Or maybe I'm just too desensitized to it all.

Peter Jackson pretty much treats this like a comedy from the lighting to the bouncy music to the overexpressive acting. I think that's really the only way he was going to get away with such a gory movie. It's not hard for me to place this as the goriest film I've ever seen.

I've been watching a decent number of horror movies from New Zealand this year. I think I may just have to continue that trend with some more picks from Kiwi-land down the road.