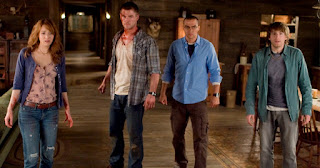 God do I love this movie. I'd say this film reached my top 10 horror movies the moment I first saw it and I continue to be amazed by it to this day. It's just the most perfect and smartly structured story for a horror movie out there. It suddenly becomes applicable with so many other movies and adds so many levels.
It's pretty crazy that this film had such a difficult time getting released, especially when you see it. It's not just good, it's mind blowing in ways that only Joss and Drew could do. And boy does it get violent. It's amazing the shift that goes on as soon as the blonde is killed.
And how crazy is it to see Hemsworth so small? For those unaware, he found out about getting the role of Thor while filming Cabin. Pretty cool considering Whedon's relationship with both the production and the MCU.
There's been talk of a sequel and as great as the first was, I'd really rather they just leave it at one. Not that I can even see how they'd possibly do a sequel, given the ending. But if anyone could find a way, I'm sure it's Whedon and Goddard.
Still, I vote no on that one.
at October 03, 2015
Email ThisBlogThis!Share to TwitterShare to FacebookShare to Pinterest