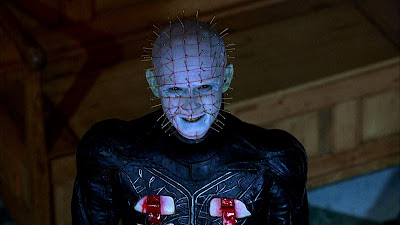 It's actually kind of funny how this viewing actually happened. I was talking with a friend about the "Hellraiser" series and he happened to rank this one above Hell on Earth, which I remembered quite liking. Given that this was "Pinhead in Space", I had always held an aversion to it and even gave my friend shit for it. After seeing it, I'm amazed at how enjoyable the movie actually is.

Sure, it's famously edited to pieces (with the director even taking his name off the final product and refusing to finish filming) so it's not like this is some fantastic movie. But dammit if it isn't extremely entertaining. It feels very thrown together and while there are some really great moments/kills they often feel misplaced. I couldn't count the number of awkward fades that happen during a scene.

They make Pinhead into such a generic slasher villain but that's okay, given that's always what I thought Pinhead was when I was growing up. It wasn't until much later that I learned of all the subtleties with his character. Even with the ridiculous surroundings, Pinhead is so clearly the best part of the movie, but unlike the other times, he's not quite as terrifying.

I had to do a bit of a double-take for the release date because I wasn't expecting it to have the level of CGI that it did. Most of the effects are on par with Jason X, which while I know that's not exactly a high bar, surprised me since Jason X came years later. Also, who else got a kick out of seeing Adam Scott in a Hellraiser movie? Has me tempted to create an "actors who started out in horror" video.

I really enjoyed this movie and it's actually made me rethink the entire series. I used to think it was the worst of the main horror franchises but that honor may actually go to the "Halloween" series instead.
at October 07, 2015
Email ThisBlogThis!Share to TwitterShare to FacebookShare to Pinterest