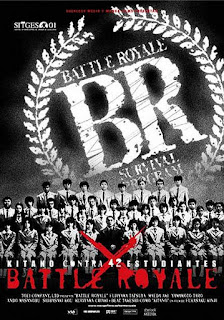 Few films have had the profound effect on me that this movie has accomplished.  The visceral nature and emotional punch the film packs is satiating for a horror fan.  Hell, the first time I saw this was some crappy digital copy with custom subtitles because no such English subs existed.  This is because the film was banned in many countries, including America where distribution was refused.  Over a decade after it's release and not only am I watching the film legally in the US, but I'm able to watch it on the big screen.

Watching this in a theater is an experience I never thought I would have the pleasure of doing.  And while I did really love it, the big screen also brought out some errors that bothered the filmmaker in me. The lack of color correction distracted me at times.  This was the Special Edition so that very well could explain for the shift in quality but I'm not sure since I believe that was the version I had always seen previous.  Oh well.  Regardless, I still loved the movie and it was a real joy to see it on the big screen.
at October 20, 2012
Email ThisBlogThis!Share to TwitterShare to FacebookShare to Pinterest