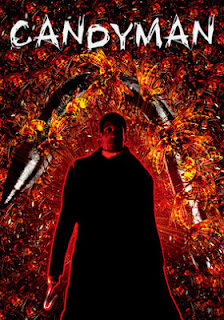 This is one of the few franchises I never really ventured into.  Sure, I knew of the story and was aware of the antagonist's existence as portrayed by Tony Todd but that was the extent.  It just never really interested me.  Finally I figured the time was up and it was time to buckle up and say Candyman however many times you need to (37?)

They should really sell this movie as "Virginia Madsen in a horror movie" and that would probably gain more interest than black man with a hook.  I mean, look at the poster above.  That's all it says to me.  It doesn't exactly scream 'strong female lead' and cool supernatural sequences ensue.  Either way, Madsen is a legitimate actress and pretty much kills it here.  Her decent in madness is pretty believable and there were plenty of opportunities to think that she is in fact the killer.  Of course, they take the standard slasher route versus the clever route, but I'm glad they at least allude to the other side.

What a disappointing ending though.  Which is all due to lazy screenwriting.  They never gave Candyman a weakness so there was nothing that could be strived for.  When he's already teleported all over and proven he's made of bees, what's to say he dies via standard mutilation.  So the ending just comes off as rushed and thrown together.  It's not satisfying and doesn't leave you wanting more, so I really can't see the purpose.  The last scene is interesting though, with the tables being turned and justice being served.  Still felt tacked on and pointless, although I haven't seen the sequels so I can't judge.
at October 29, 2012
Email ThisBlogThis!Share to TwitterShare to FacebookShare to Pinterest