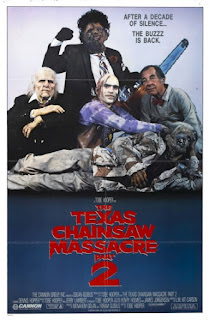 The movie itself is okay.  It's nothing fantastic and absolutely not the staple of the genre that the first film is, but it's a good time regardless.  The characters are batshit and you can see that Rob Zombie took a lot from the Sawyer's when he created the Firefly Family.  But the problem is with these character's inconsistencies.  One minute Leatherface is cutting people in half, the next he's refusing to cut up the lead girl.  He's never a real threat which, given that this is TEXAS CHAINSAW MASSACRE for christs sake, he should be the MAIN threat.  Instead he's an idiot hick who takes orders from anyone with a voice box.

And what is with Dennis Hopper?  Is he incapable of playing a normal character just once?  This guy is almost as nuts as the Sawyer Family.  He goes around with his extra long chainsaw just cutting down supporting beams in a mine for a good ten minutes of the film's conclusion.  That's all he does.  I understand he's trying to take the Sawyer's down but my god, do you have no regard for the fact that you're underground destroying every part that doesn't make it just ground?  I mean, I'm sure in the process you'd potentially kill a Sawyer but more than likely, you'll just be killing yourself, Mr. Hopper, thus making your character entirely pointless.  Oh well, that's too much thinking on my part.
at October 29, 2012
Email ThisBlogThis!Share to TwitterShare to FacebookShare to Pinterest