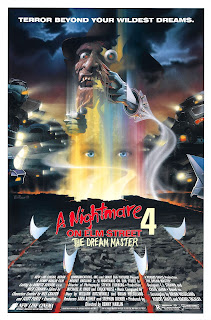 29. A Nightmare on Elm Street 4: The Dream Master

I started out this series with a Nightmare film so I figured having one near the end would be a good bookends.  And after witnessing the amazing Hi-Def transfer of the first film, I was anxious to see what other films in the series looked liked.  I can safely say that Nightmare 4 doesn't quite live up to the first one's video standards (and is even behind 3 in that department).  The image is just muddy at some points and not very appealing in a higher resolution format.

The film itself is as good as ever.  I really used to have a hard time deciding between this film and Dream Child but this one is the clear winner.  The characters are better, the transition of heroines is both new and interesting.  And even though the Alice character is much stronger in 5, this one is still likable and not nearly as grating as the new chick that plays Kristen.  What an awful choice.  I can't decide what is worse, her acting or her haircut.  Did I just do a haircut joke?  Moving on...

I'm still annoyed that they just killed off Kincaid and Joey.  Those characters were awesome in Dream Warriors and deserved so much better.  I may have cared about Kristen's death had it been Patricia Arquette in the role, but without her, I just kept waiting anxiously for Freddy to off her.  Not a good sign when it's one of the female leads but somehow the film still pulls through.
at October 31, 2012
Email ThisBlogThis!Share to TwitterShare to FacebookShare to Pinterest