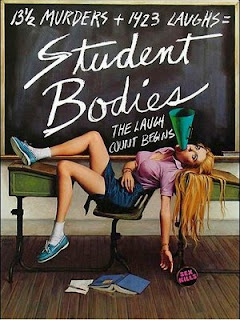 Let me start out by saying I had no idea this movie even existed until a few months ago.  Had I known about it, I would have watched it much sooner.  It's so ridiculous that it's actually pretty funny.  Sure, it's not mature but neither are a lot of good comedies.  This really takes the "Airplane" approach to the slasher genre and it pays off in many respects.  There are some lines are pure classics too.  The opening scene has some of the best moments of the entire film, so at least sit through that.

Unfortunately it's not all fun and games.  It's slow and the kills are uninspired.  Every guy dies the exact same way.  Many jokes aren't milked for what they're worth.  There's also not any character that you even remotely feel connected to.  Hell, I felt more attached to some of the one-dimensional Friday the 13th characters than I did these people.  Can't say I really blame the filmmakers though, that's clearly not what they were going for.  I just don't think it's too much to ask for one likable character.  The closest we got was a Woodshop Teacher with a weird fetish for Horse-head bookends.

Also, how old is this cast?  And I'm not just talking about the clearly late twenties "high schoolers."  A majority of the cast consists of teachers/maintenance men/parents.  Which is where I think the movie misses the point.  How prominent are the adults in any other slasher movie?  Easy, they're not.  Yet this movie, which is supposedly parodying slashers, makes them practically a focal point.  The "teens" are there for there death scene and that's it.  A follow-up with the adults after nearly every death is where this film loses any credibility of being a true parody.

Regardless, I'd recommend you give it a shot.  Sure, it's not incredible or even very good but has some funny moments and is yet another 80's "slasher" to mark off the list.
at October 05, 2012
Email ThisBlogThis!Share to TwitterShare to FacebookShare to Pinterest