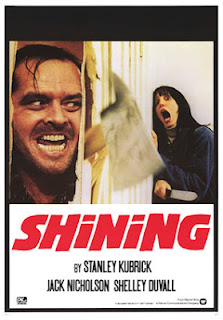 I was originally going to save this until later on in the month since it's my favorite horror movie of all time but a discussion of this film in my Video Seminar prompted this viewing.  One aspect of the movie that I really appreciated this time was Nicholson's performance.  He does such a good job and his gradual insanity is a sight to behold.  I know that it can come across as a bit much depending on the viewing, but I think he did exactly what he needed to: ooze insanity.

And my god, those tracking shots.  This is one of my favorite movies of all time for a reason and a large part of that is due to being at the hand of Stanley Kubrick.  The tracking shot following Danny as he goes through the hotel on in his tricycle: pure magic.  The sound design of that scene, coupled with the intense conclusion, makes for one of the greatest scenes in any movie, ever.  Yes, it's that good.
at October 14, 2012
Email ThisBlogThis!Share to TwitterShare to FacebookShare to Pinterest