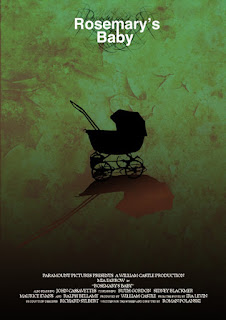 For years I was convinced I had seen this movie.  So I finally gave it a "rewatch" and realized: I don't know what movie I had seen before, but it wasn't Rosemary's Baby.  Looking back, I always had the opinion that the film was slow and not a lot happened.  I also didn't think that the film was very "horrific."  Boy, was I wrong.  This movie is intense in all the best ways.  I love the dynamic going on between all the characters.  Nothing every feel quite right and that's all due to Polanski, a director who I haven't been exposed to much.

The best part is that this film always seems to leave you guessing.  It engrains you with this deep sense of paranoia, the groundwork of which is laid out perfectly throughout the screen time.  And Mia Farrow.  Wow.  That woman deserved an Oscar nom.  What a wonderful performance and one rarely ever seen in a horror movie.  She's plays oblivious in a way that doesn't leave you wanting to strangle her.  And that was something I didn't realize until the movie was over; with any other person, that role could have very easily been obnoxious and grating.  But Farrow handles it perfectly and gains sympathy from the viewer.

So yeah, go watch this movie if you haven't.  Don't be turned off by the age, it's one of the greatest horror films of all time.
at October 20, 2012
Email ThisBlogThis!Share to TwitterShare to FacebookShare to Pinterest