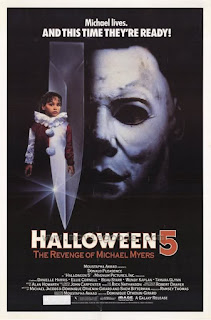 28. Halloween 5: The Revenge of Michael Myers

Dammit AMC.  This is what you do to me.  You make me resort to watching the entirety of this crappy movie without any of the good stuff because it was all chopped up on TV.  It's like they were just wanting me to watch this film.  Throughout the month, whenever I had freetime, I'd flip to AMC and this would be on.  I'm not kidding you, this happened at least a half a dozen different times.  And finally I gave in and watched it, when I shouldn't have.

The only reason to ever watch this movie is to see some of the kills and the nudity, and even those aren't very good.  So why on earth would I watch this, especially when the DVD was sitting five feet away?  Pure laziness.  I just didn't care to pop this movie in, then it felt like I was devoting less time to the crapfest known as Halloween 5.  That's giving the film too much credit and my main reason for owning it is simply for the pairing with H4.  Sometimes it's nice to watch them as a two-parter, though I'd consider this entry of the series to be a "skip it."

And what is the deal with that mask?  It's just terrible.  The elongated face and...is that...is that longer hair?  It's a mask, how does it grow!?  This just doesn't make sense to a ridiculous degree.  It's like the filmmakers didn't even try.  With an iconic mask like Michael Myers, you'd think it wouldn't be difficult for the filmmakers to actually make the mask similar to the original.
at October 31, 2012
Email ThisBlogThis!Share to TwitterShare to FacebookShare to Pinterest